Outside of the comfort zone 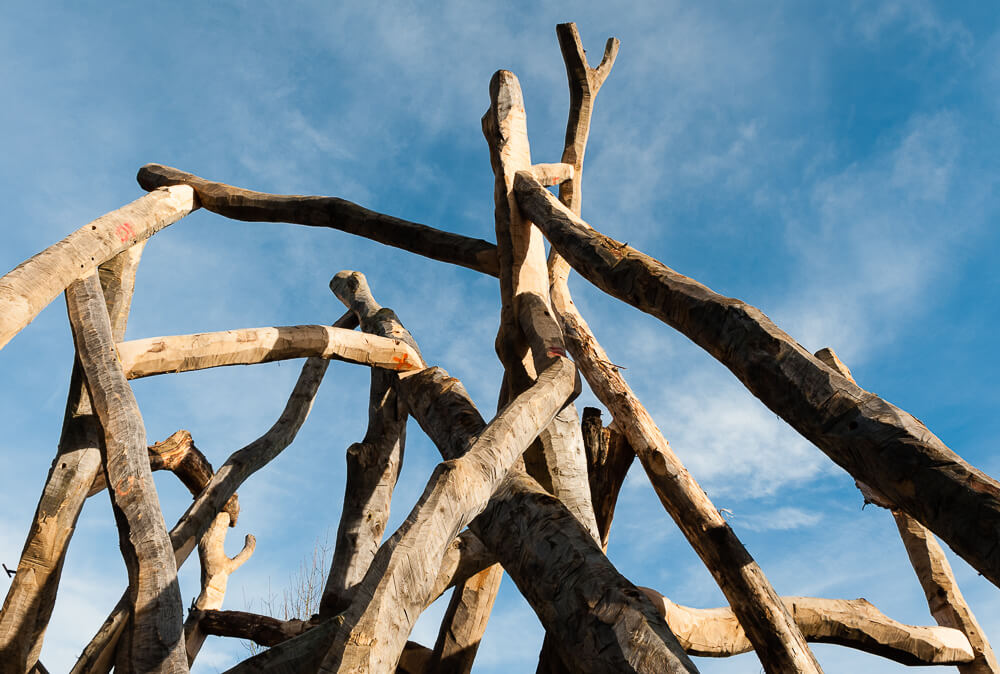 We are definitely not sculptors. Oh no.

So, imagine our surprise when Ivan and Heather Morison of Studio Morison contacted us to see if we were interested in building a large roundwood sculpture that they had designed and which had been commissioned for a new amenity space near Cambridge.

How large? What? Where? Why?

Our curiosity got the better of us and we made the mistake of taking a trip to the Morison workshop in nearby Weobley to meet Ivan and Heather to talk things through. We looked at their plasticine scale model, inspected the debarked chestnut logs coiled and stacked expectantly outside, scratched our heads and ended up feeling excited by the whole idea.The bait had been set, and before we knew it, we had shaken hands and agreed to fabricate the “Bronze House” – it even had a name…

This was of course the key question that now started to occupy our minds. Night and day. Thinking about constructing a 9m tall structure out of seriously wonky roundwood ended up being quite stressful but with the help of Greg Cohen, the responsible structural engineer, we came up with what felt like a suitable theoretical jointing method. Now we just had to put it into practice. 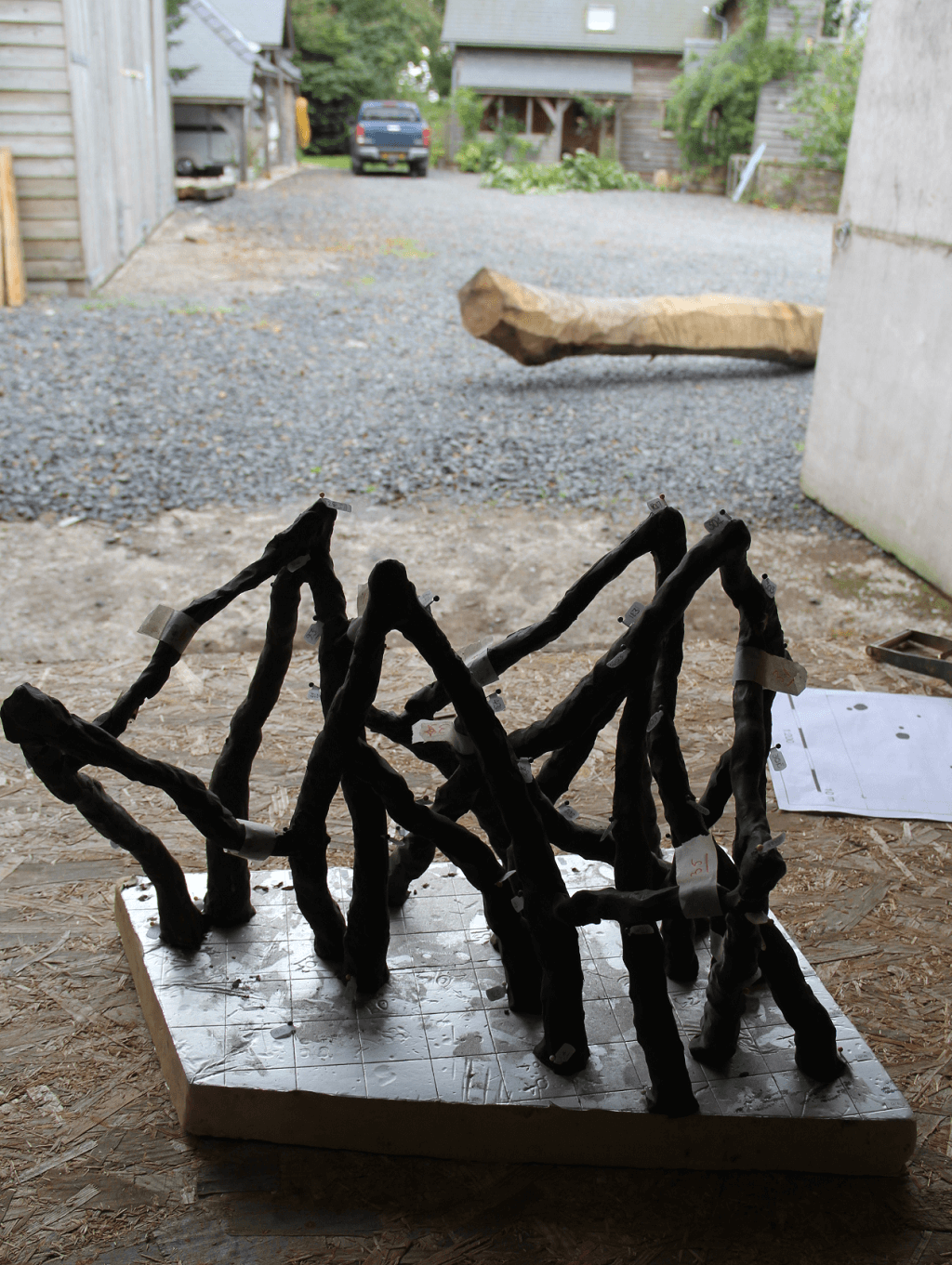 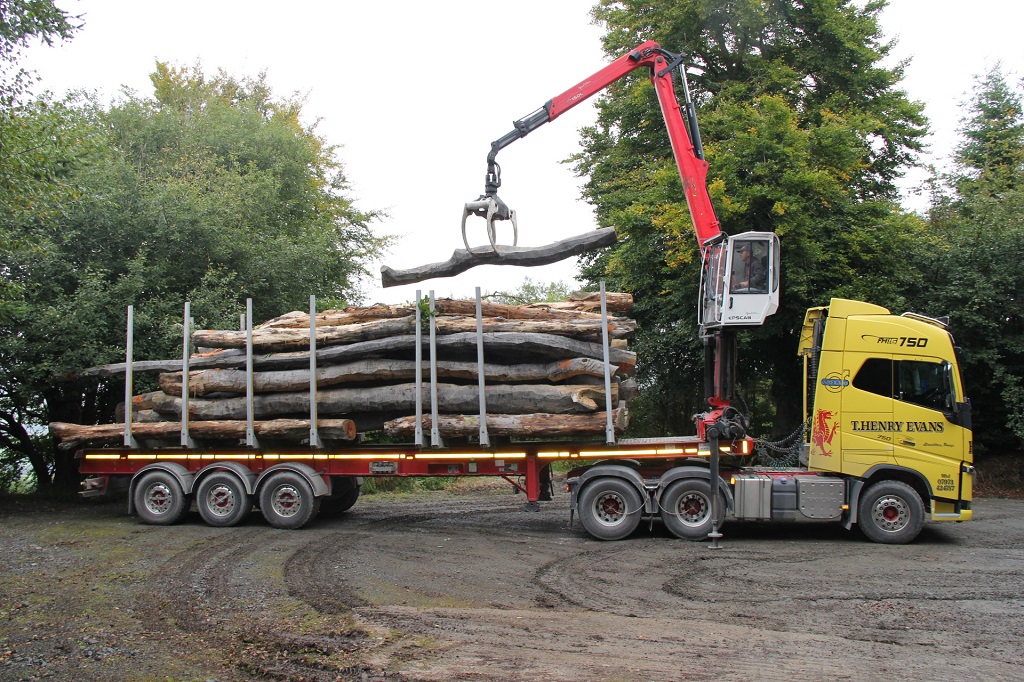 The timbers were duly delivered to Castle Ring for fabrication (a mere 25 tons in all) and we were confronted by the enormity of what we had undertaken. In reality however, making a start meant we could stop worrying and start doing. The sculpture is based on 4 tripods with a dozen or so connecting timbers all of which had to be positioned to match the model. This was critical for the final positioning on site in Cambridge.
So we picked the first tripod. We created a flat on the first log with a chainsaw and planer, and laid up the second log so that we could scribe shoulders and a tenon. The mortice and tenon is secured with oak pegs and reinforced with stainless steel rod, washers and nuts. Now things got trickier as we had to find a way to correctly position the foot of the 3rd leg relative to the other 2. Up in the air! All this before we could scribe and cut the joint. As you can see we used the telehandler for lifting, with ropes tied to the correct lengths at the feet to form the base of the pyramid. 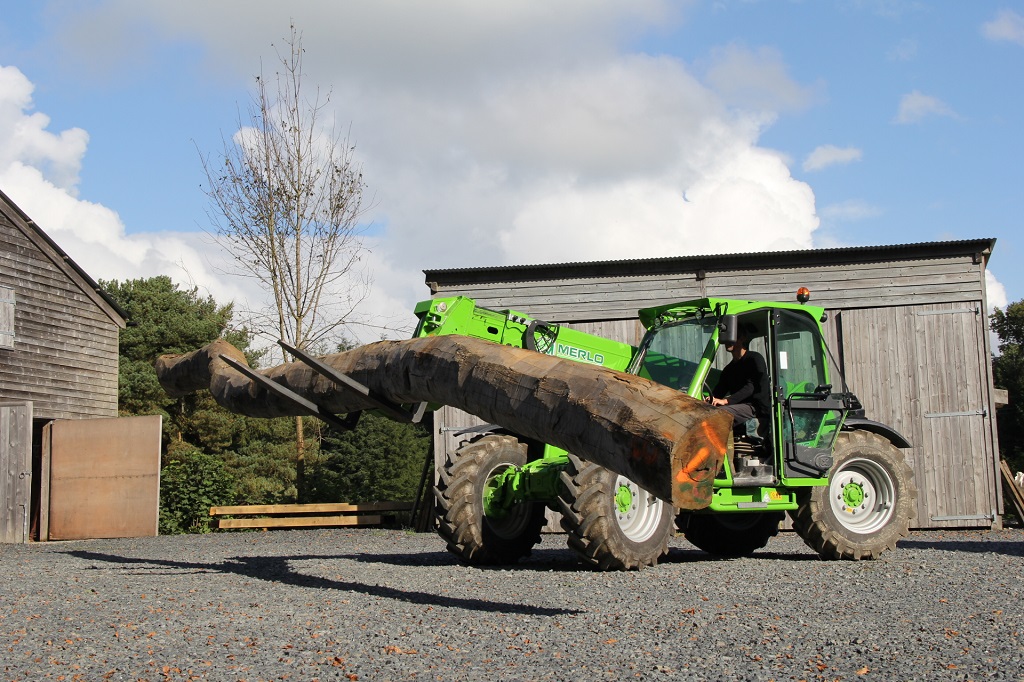 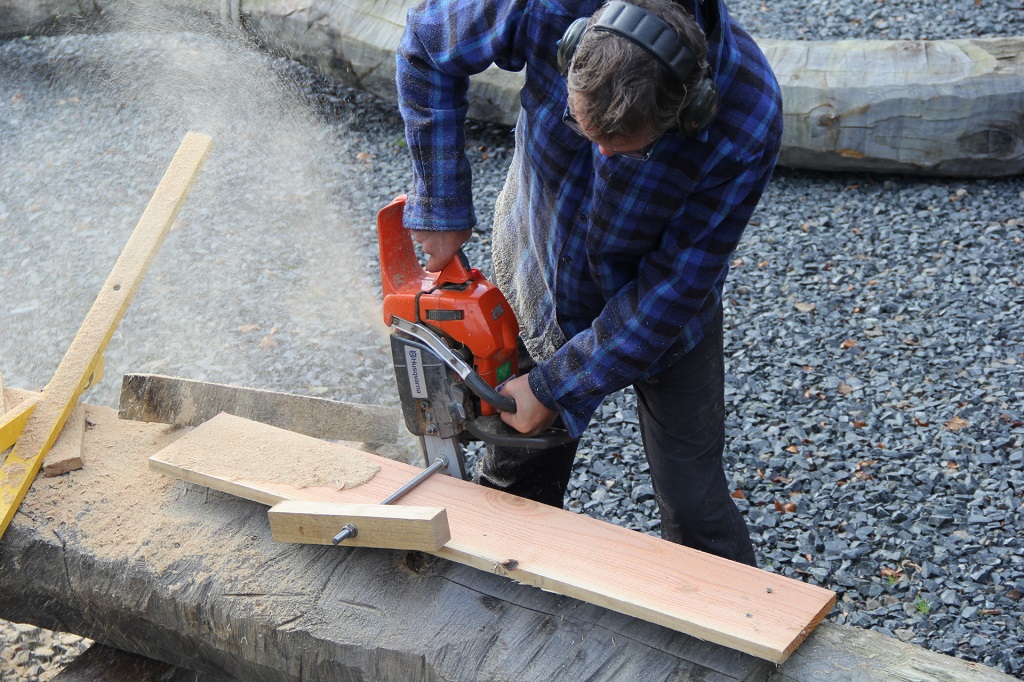 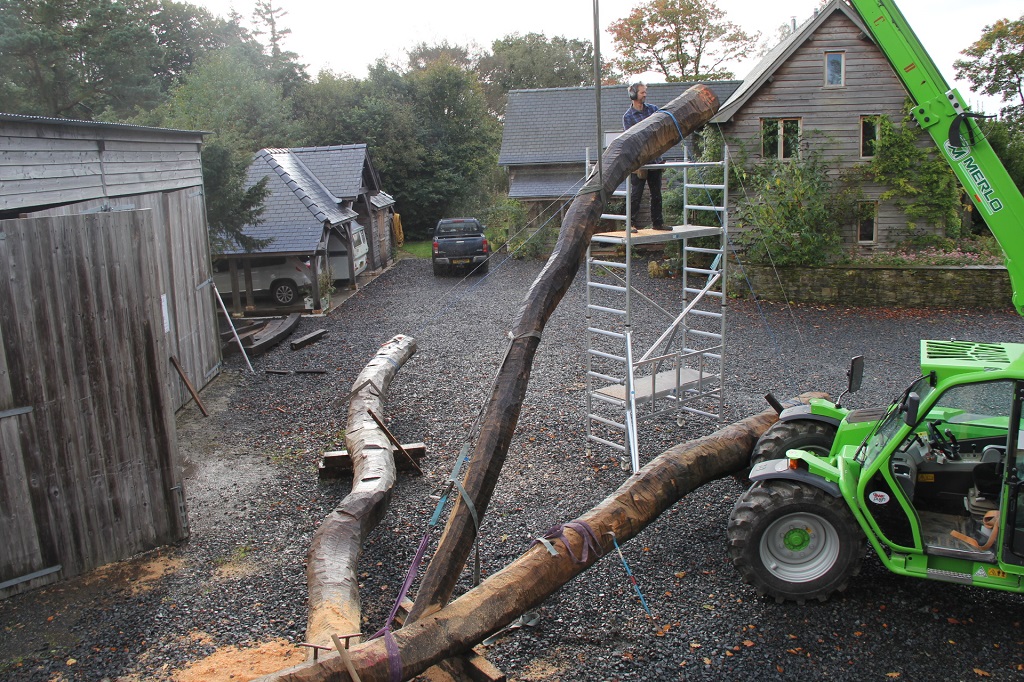 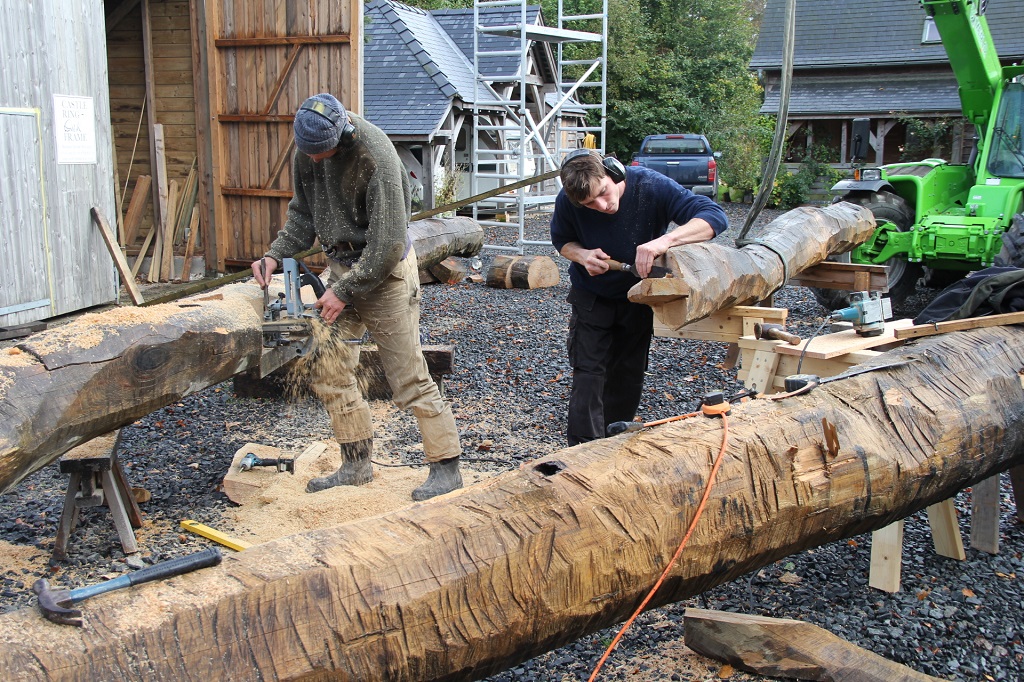 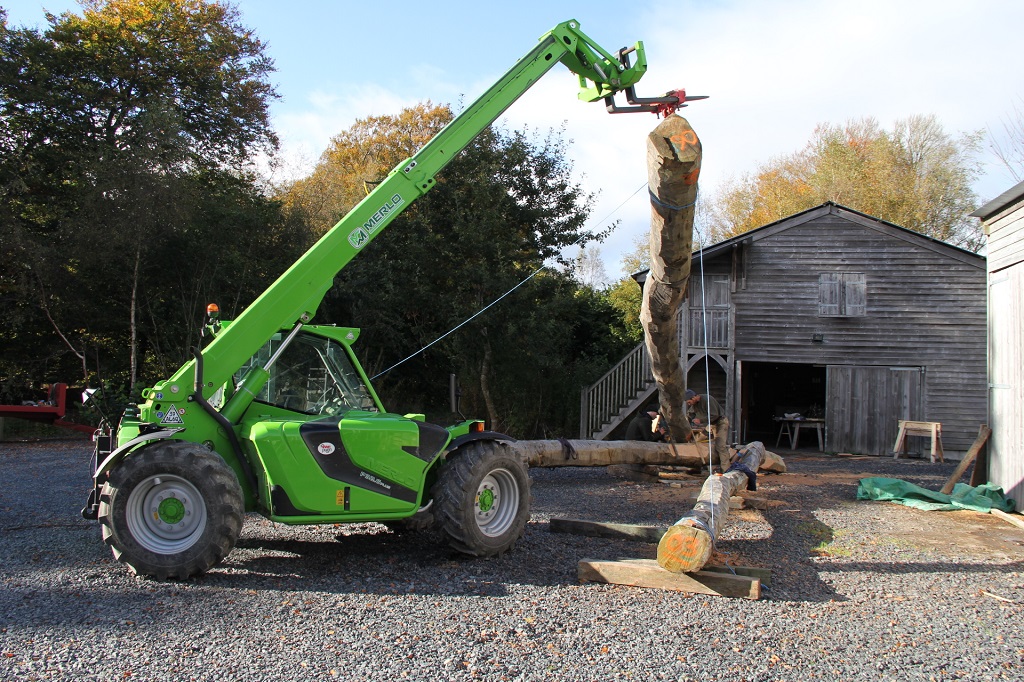 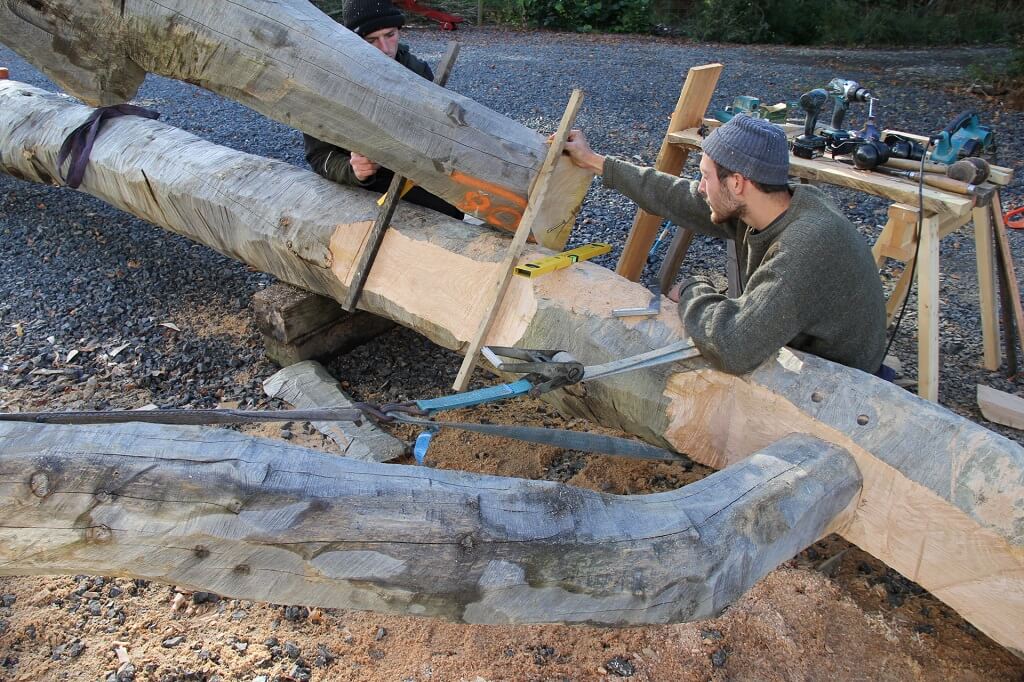 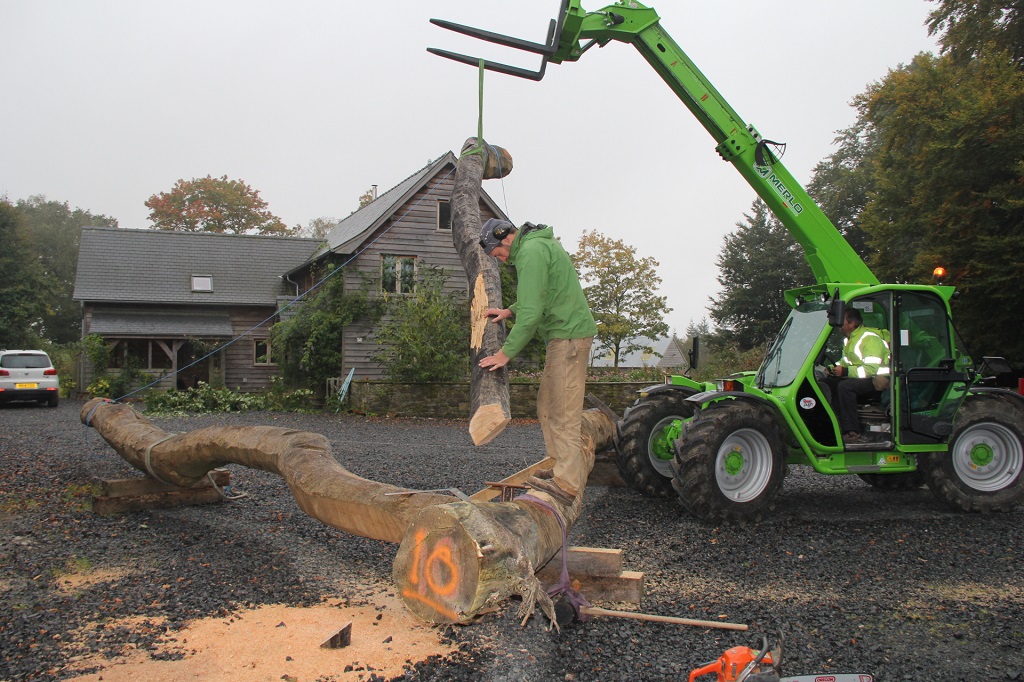 With the 4 tripods now jointed on the ground, it was time to think about erecting them in the yard so we could continue working on the connecting timbers. We booked a crane, 2 telehandlers and a cherrypicker and prayed for a calm clear day, not always a given at the beginning of November…. We got lucky, and were able to successfully assemble the tripods in the air, taking care to brace the feet with 6″ x 2″ timbers to avoid stressing the joints. The tripods were then lifted independently and repositioned relative to each other. I’ve got no idea what the neighbours thought we might have been up to….. 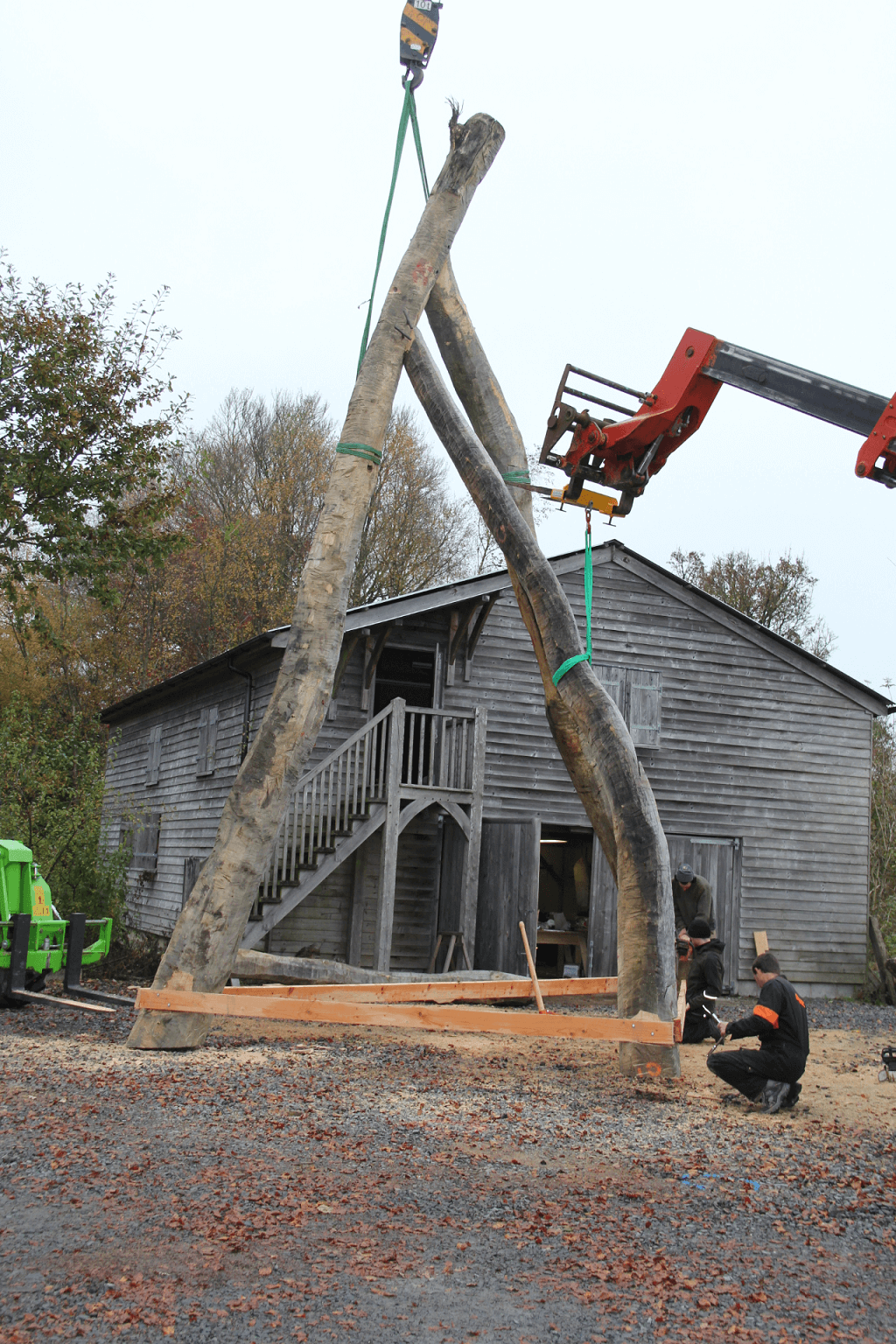 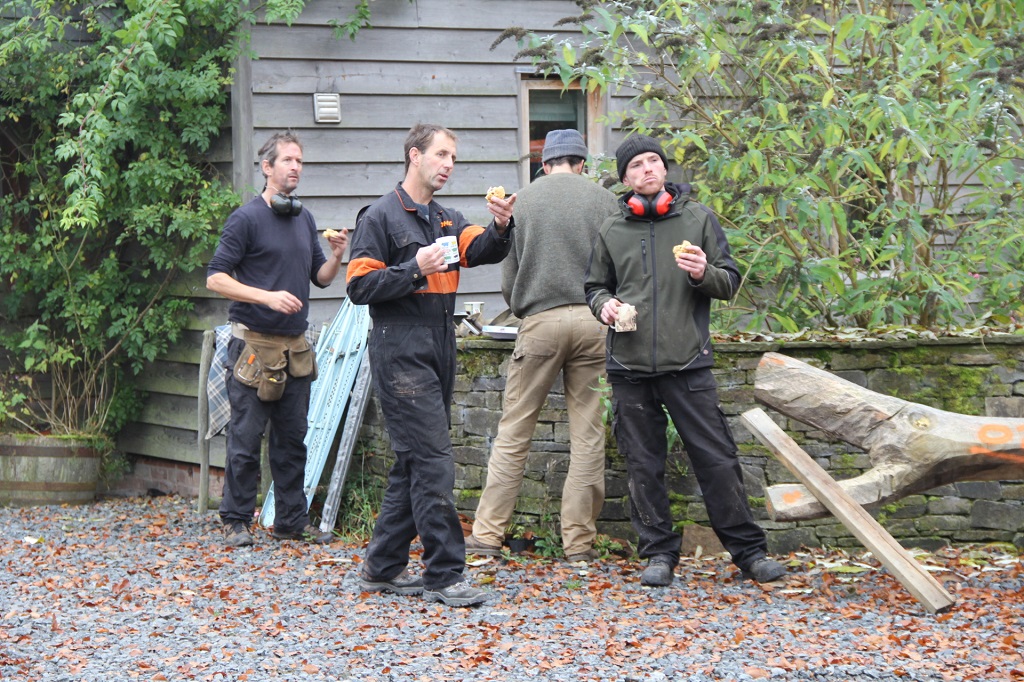 With the fundamentals of the structure in place, we could now focus on jointing the upper connecting pieces in place. Everything so far had taken place with the security of the earth beneath our feet, but now we had to step even further outside of our comfort zone with scribing and jointing happening 30 ft up in the air. Painstaking and dangerous work for sure, but slowly, piece by piece the sculpture took shape and 2 weeks ago, we were able to show off our work with an open viewing attended by over 80 interested and inquisitive spectators. 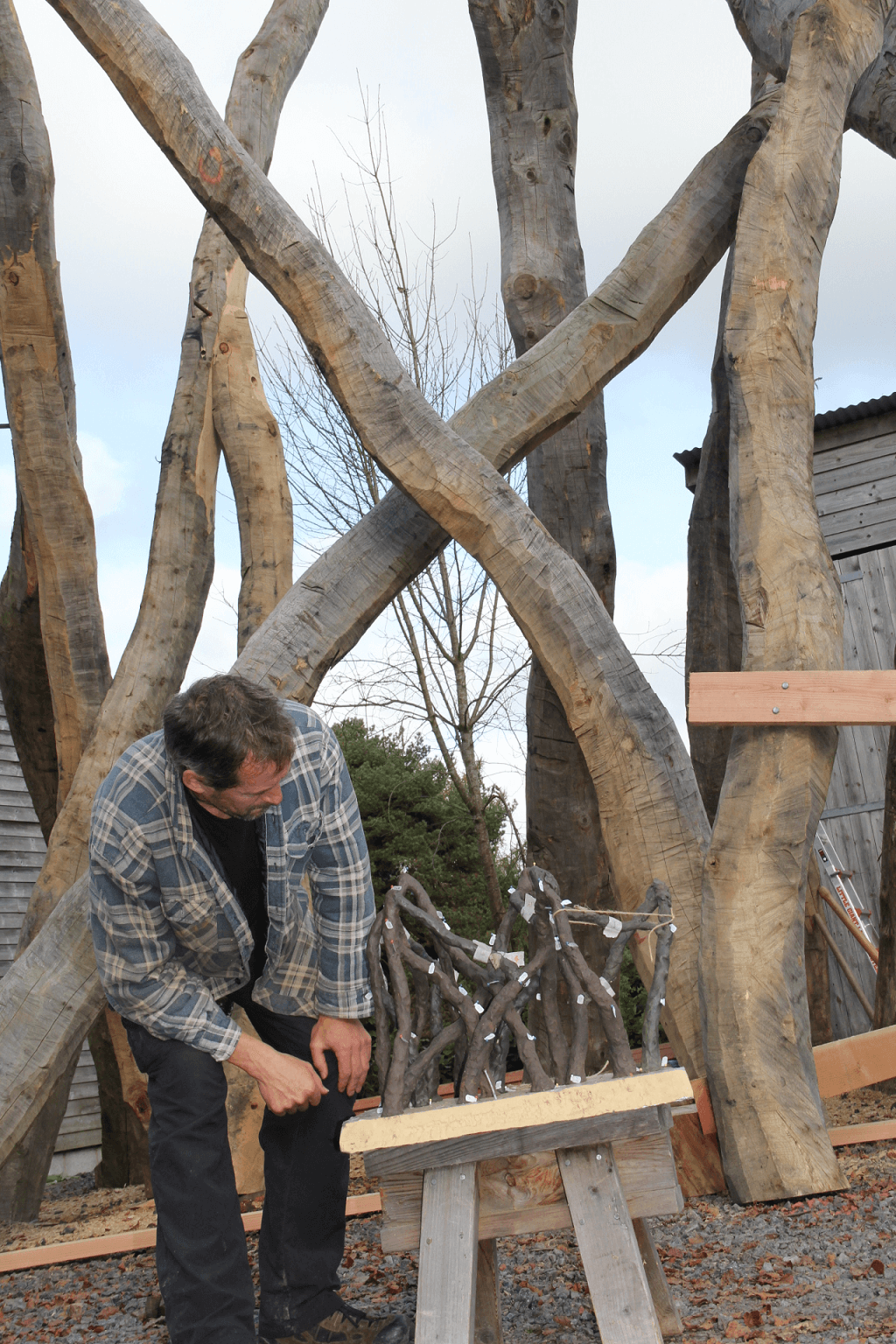 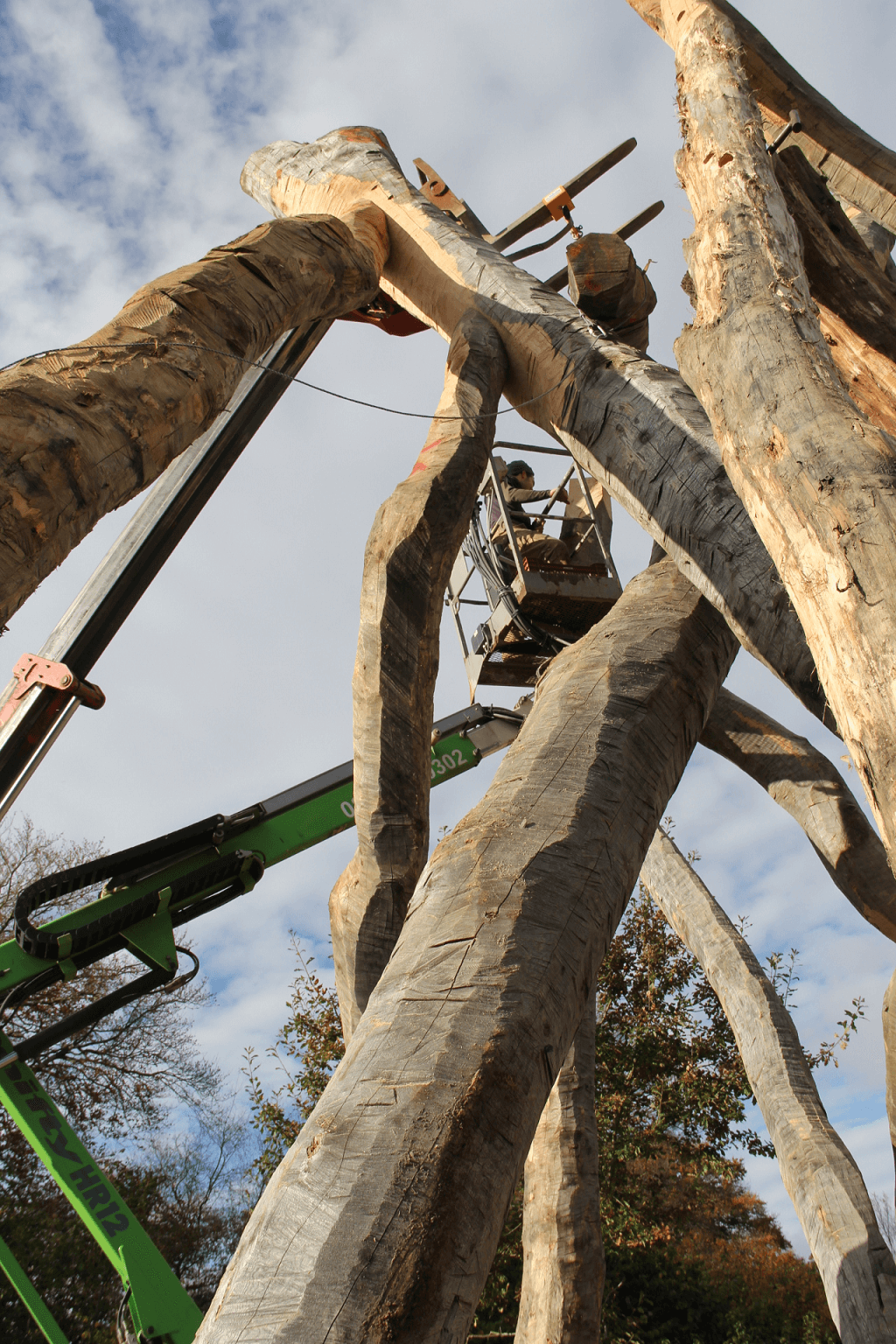 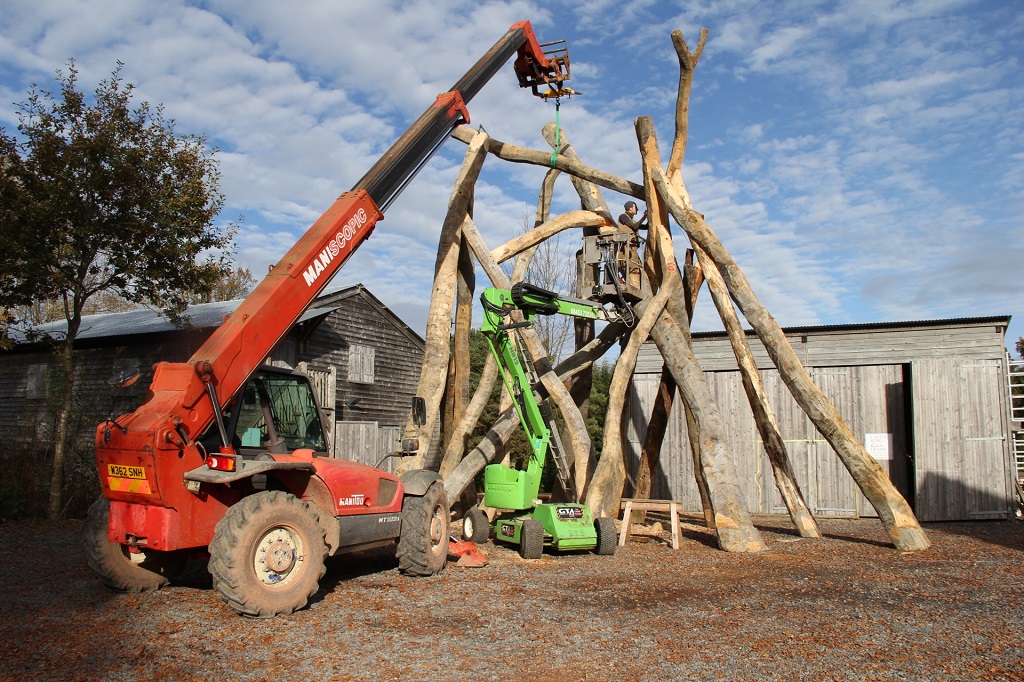 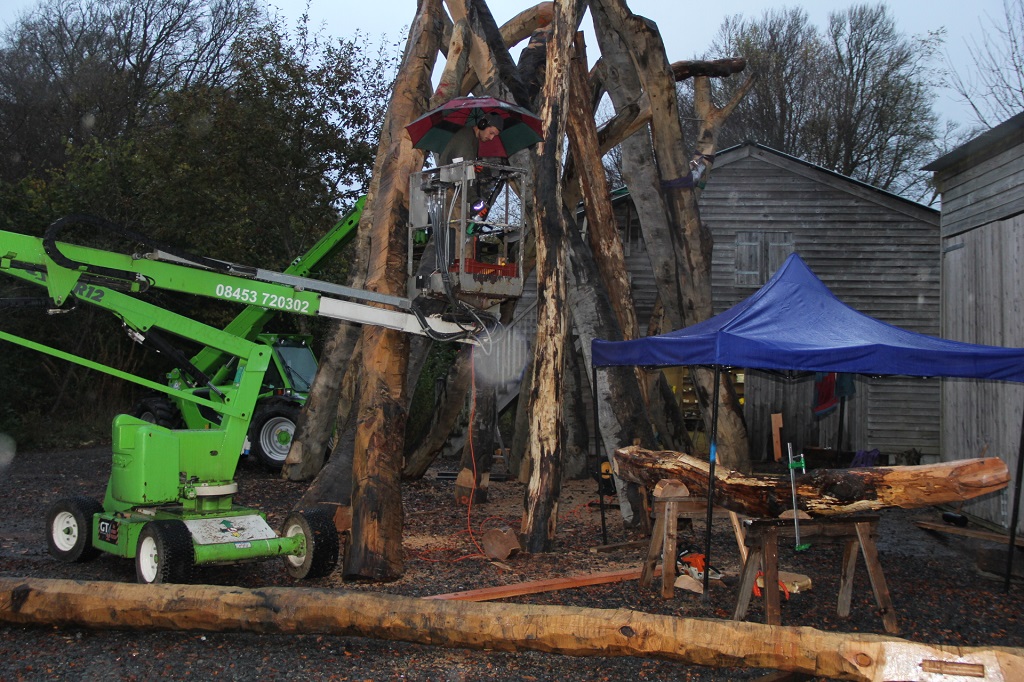 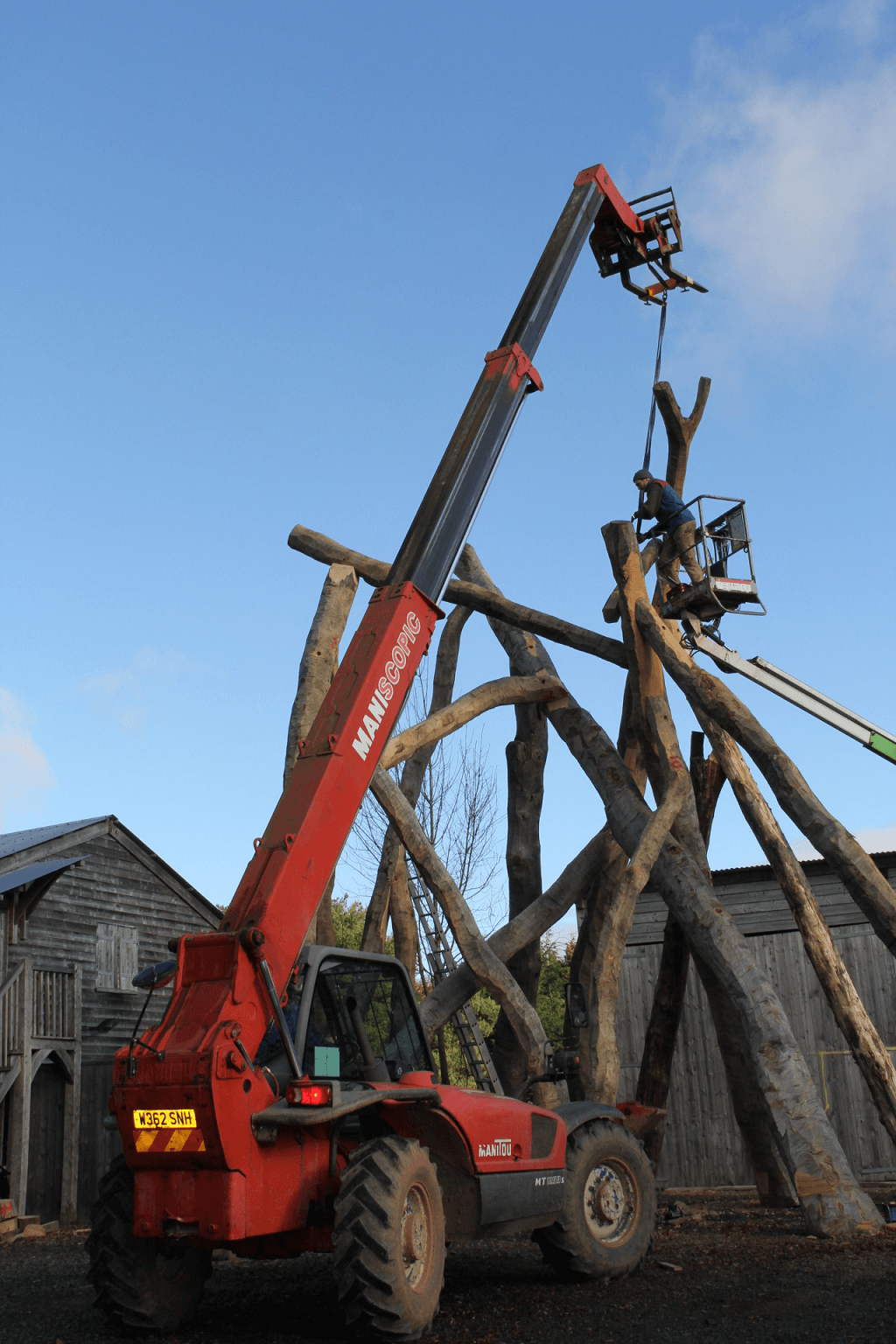 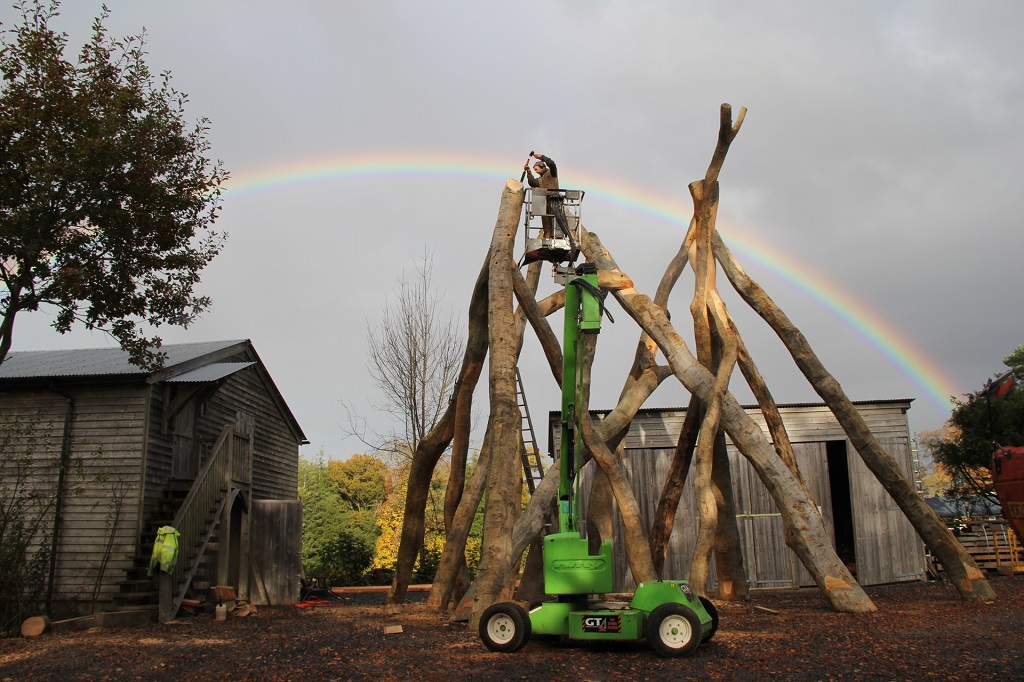 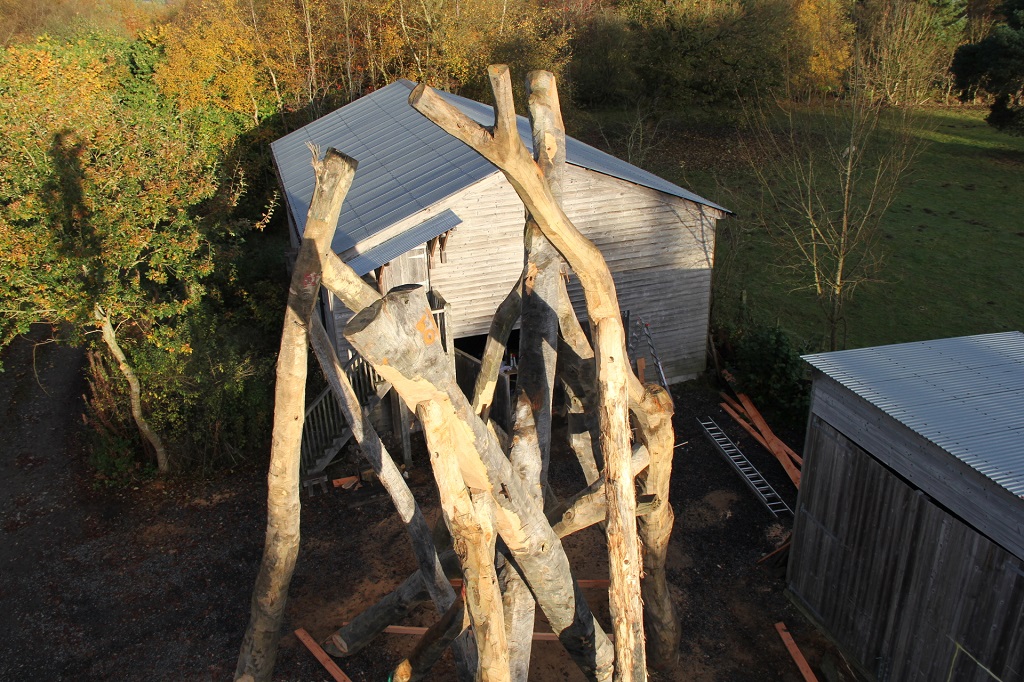 We’ve enjoyed making it, living with it, walking underneath and round it. It’s been all consuming at times and has pushed us far beyond our normal physical and technical limits. But we did it, and the warm glow of achievement hasn’t quite worn off yet, even though it was dismantled recently to begin it’s final journey to Cambridge. If you’d like more info on the project and where it’s going, head to Hobson’s Square in Cambridge.
Special thanks to our brilliant photographer Alex Ramsey for finding the time to capture it before it disappeared – his wonderful photos are here below and top image: 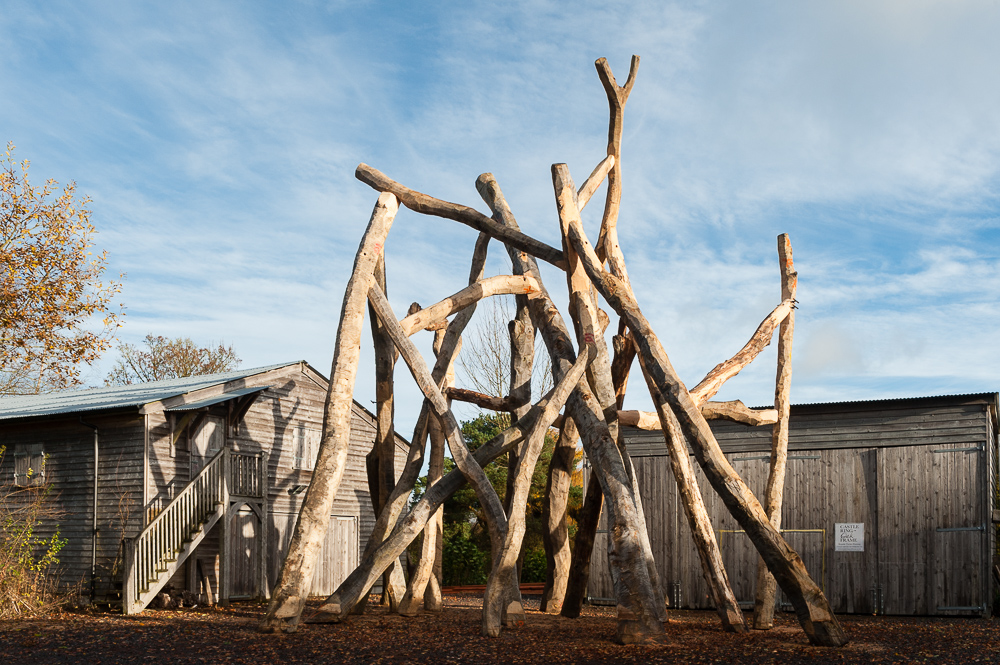 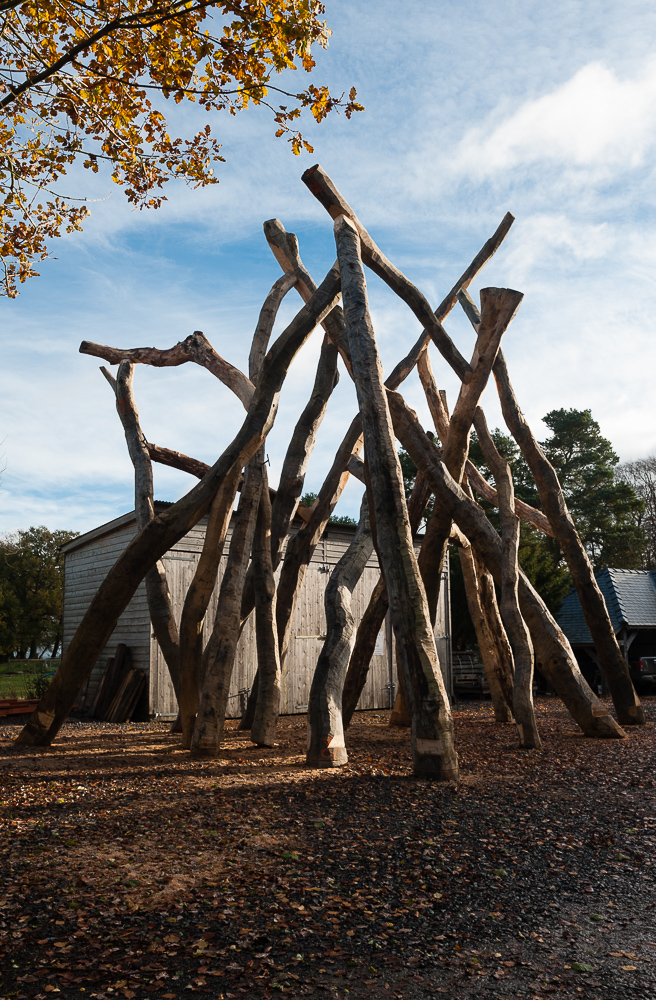 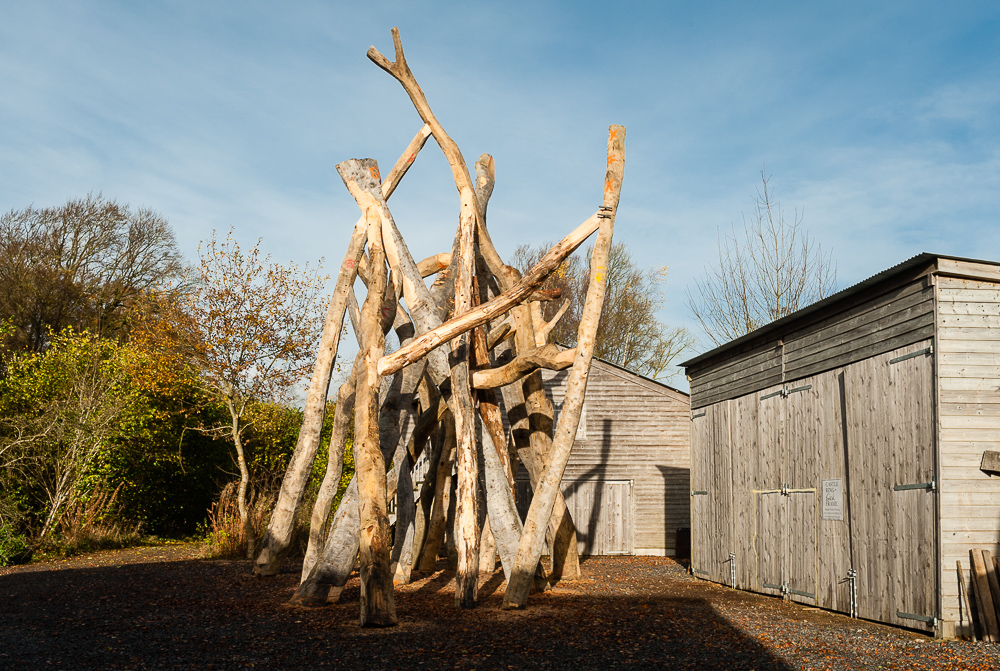 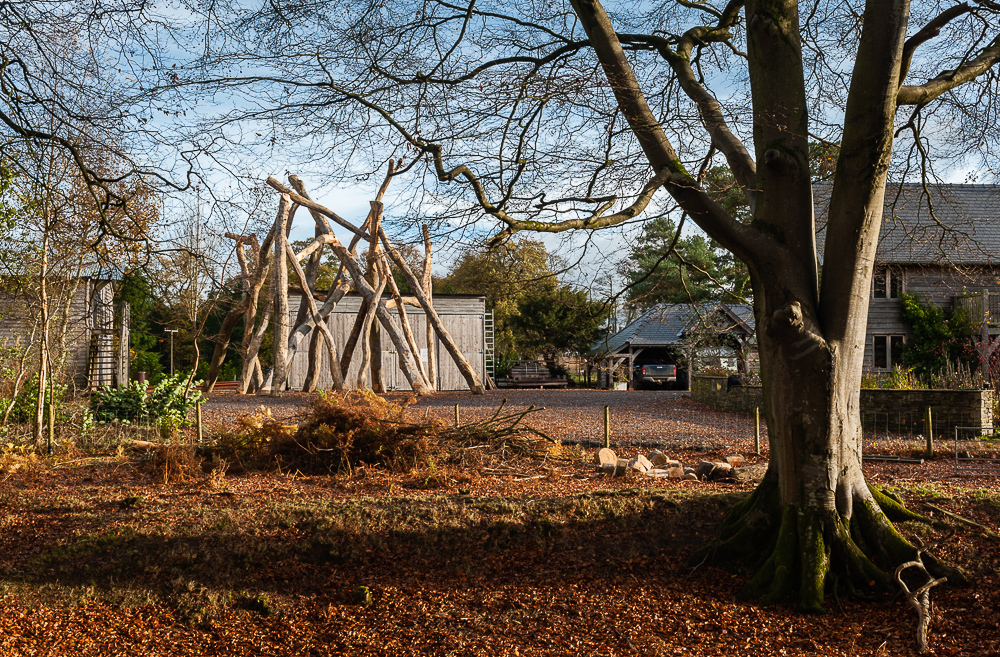 Last week we went to Cambridge to raise the sculpture which we built for Heather and Ivan Morison. The chestnut timbers had been scorched by the Morisons with a giant blow torch, then tarred and finally rubbed down by hand with a wire brush. The large-scale public sculpture was raised on Hobson’s Square, Trumpington in Cambridge. It sits at the centre of the square referencing the Bronze Age archeology found on the site. 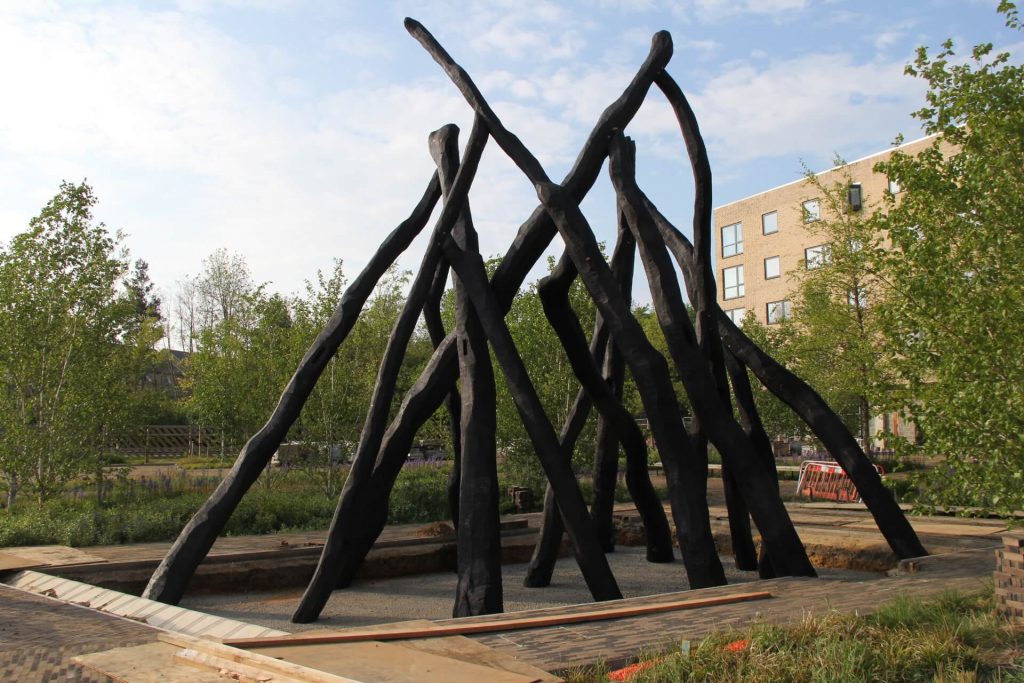 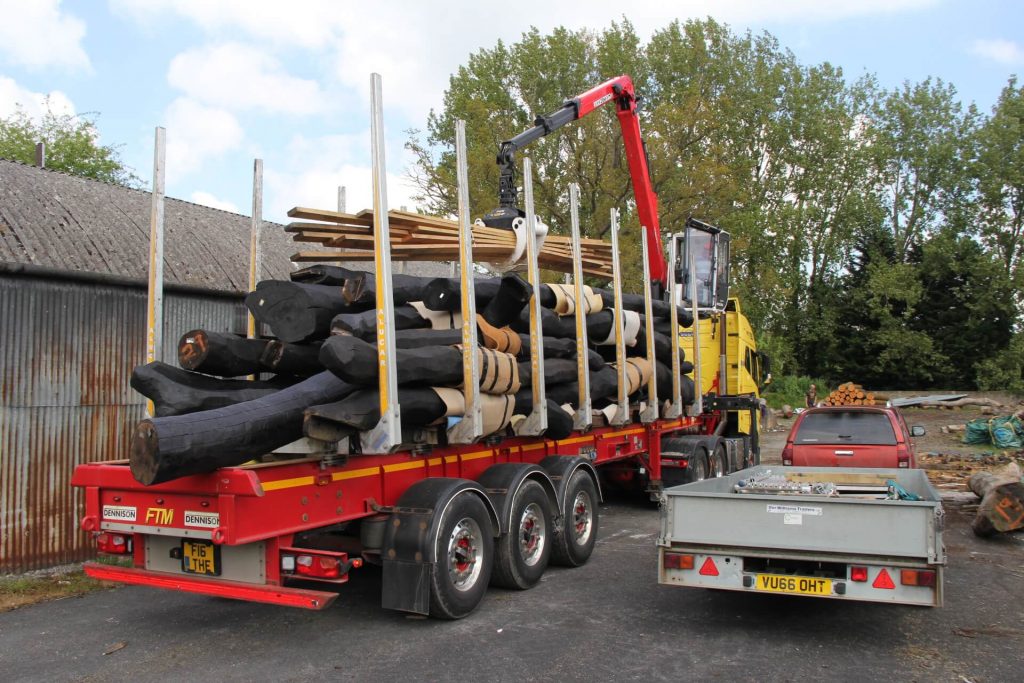 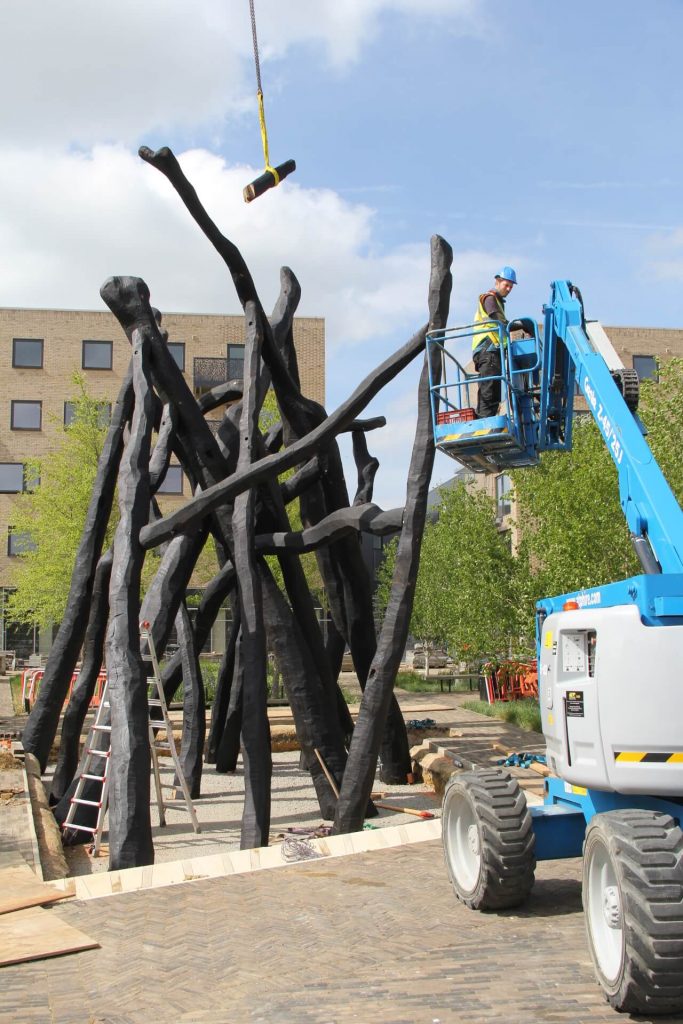 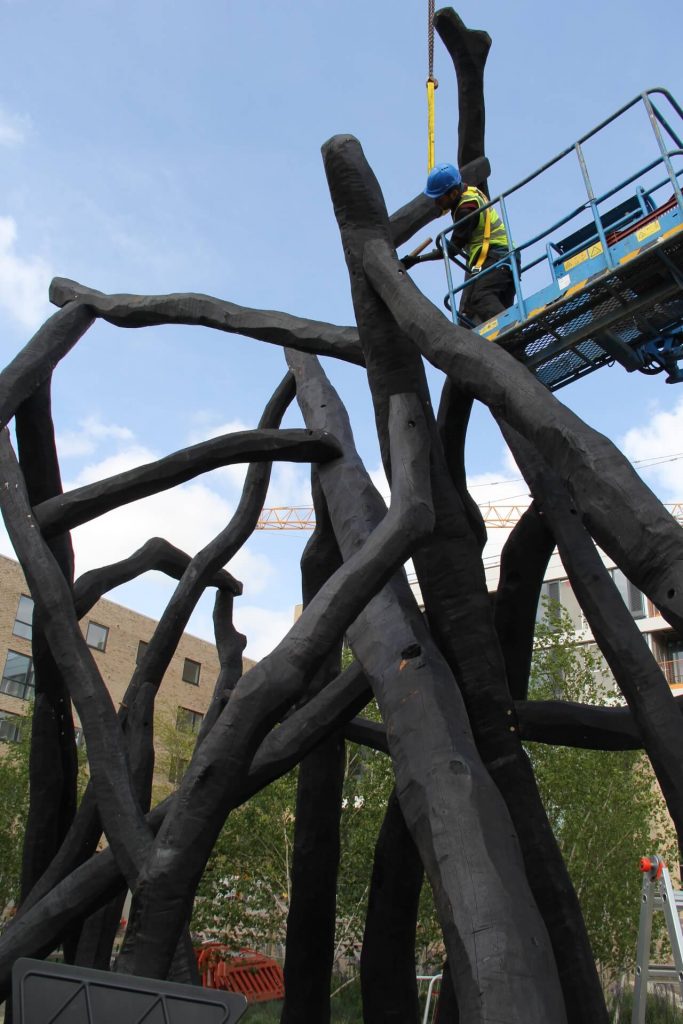