Dawn of the Shed

Presteigne, our local town, is home to a kooky and creative community of people, some of whom have got too much time on their hands.

So it was that one of them, who need not be named (Owen Rimington), decided that what Presteigne needed, to get itself noticed even more, was a shed building competition. Rumour has it that the rather too cleverly titled “Dawn of the Shed” was the chicken that preceded the egg…

Not being nearly busy enough with timber framing (our day job), we decided to support Owen and the Sheep Music backed event. After all, how difficult could it be to build a shed out of recycled materials over the course of a weekend? It might even be fun.

We gathered together as many materials as we could lay our hands on – waste bits of studding, unused and old weatherboarding etc and struck gold with some decaying and dilapidated window frames that our friends Tony and Christine were about to consign to the tip (if such a thing existed in Powys anymore). Now it was time to assemble a team of crack (heads?) guerrilla carpenters who would sweep our funky shed, with a combination of inventiveness, imagination, and distilled genius, to Presteigne immortality…..and the glory of the coveted Shedwrights crown to boot.

As it happens, thankfully, there were no elite, crackerjack carpenters available, so rather like the shed itself, the team was comprised of various recycled, discarded, misfits and vagrants who had nothing better to do, and were attracted by the prospect of free beer and food for a whole weekend.

Saturday arrived and we assembled on site at a leisurely 11am to find that the other competing teams were already busily cutting, hammering, nailing and erecting. Realization struck. We had a lot to do and better get on with it.

Our fag-packet design was shared with the team, 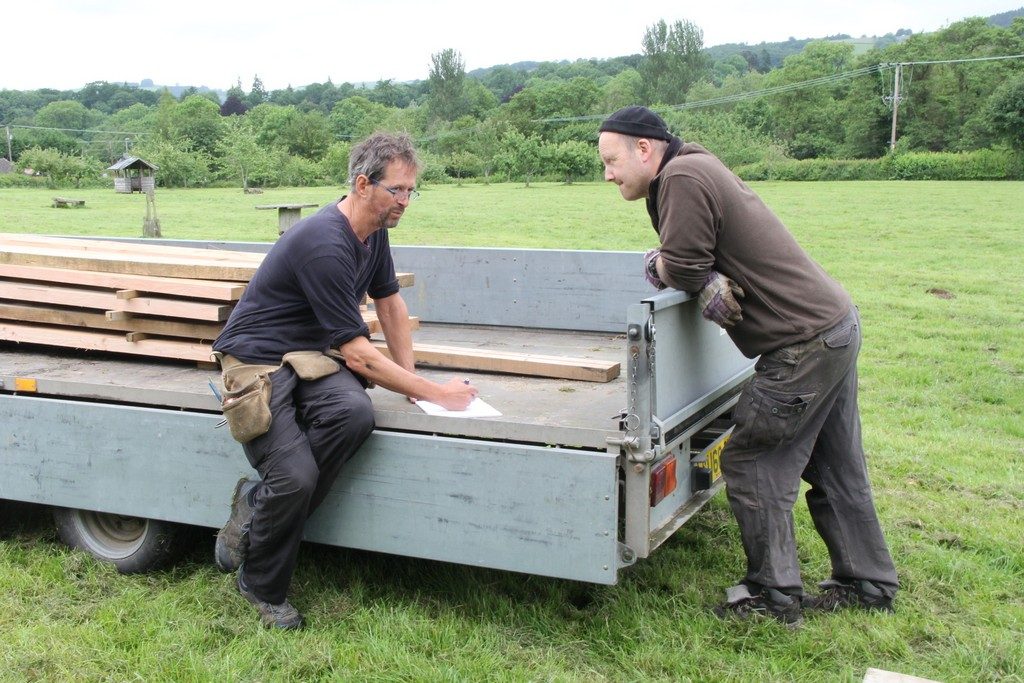 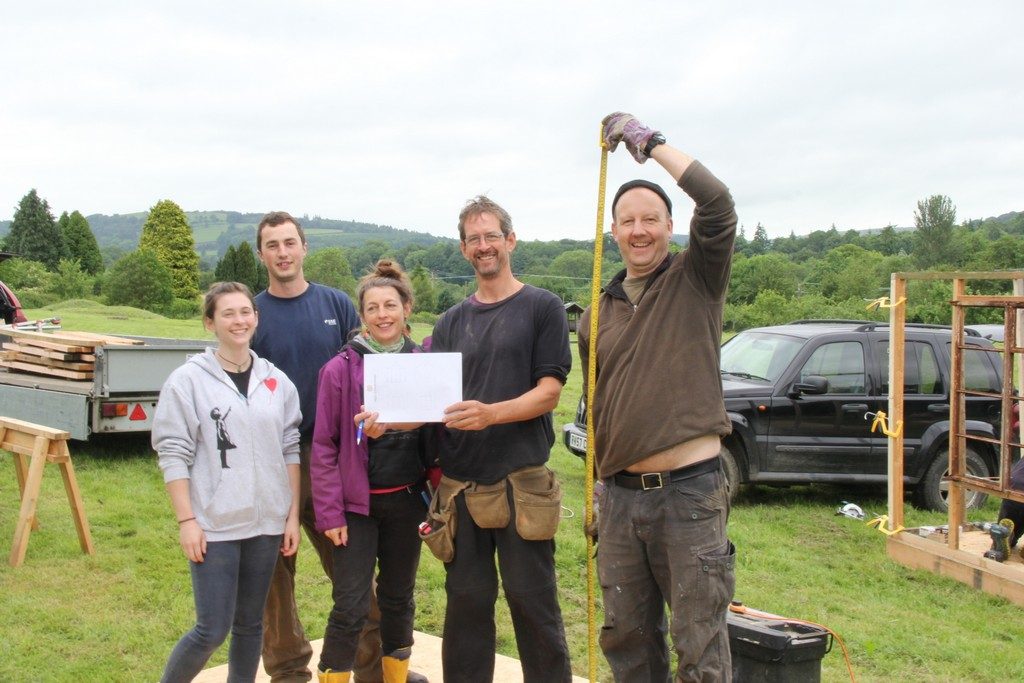 and we knuckled down, sorting the windows, 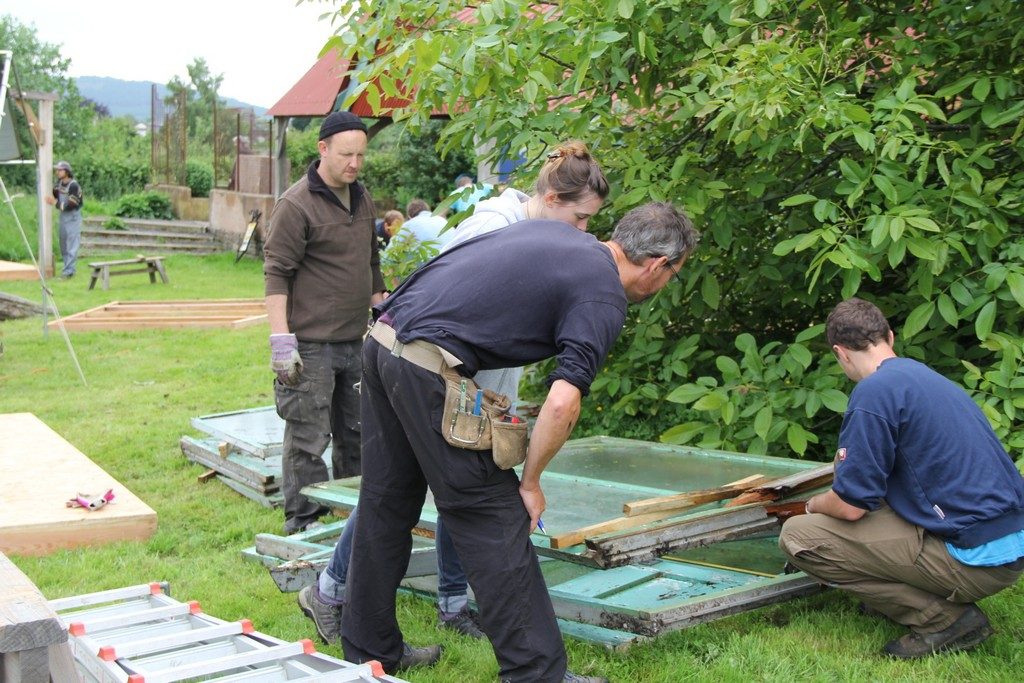 and building the studwork walls to receive the windows, and fit on the pre-prepared base. 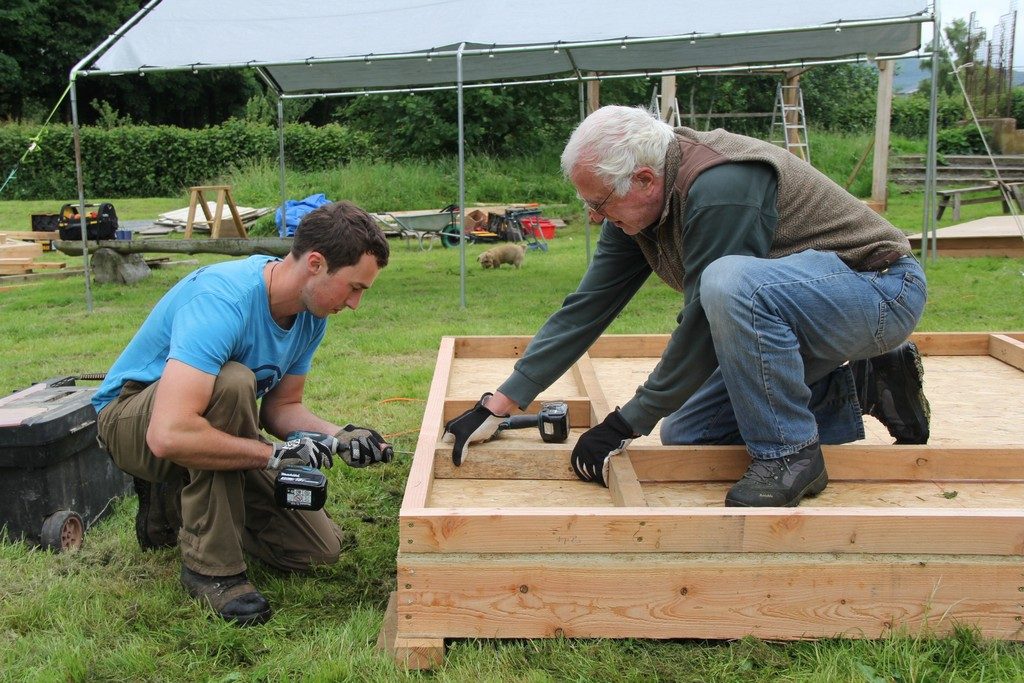 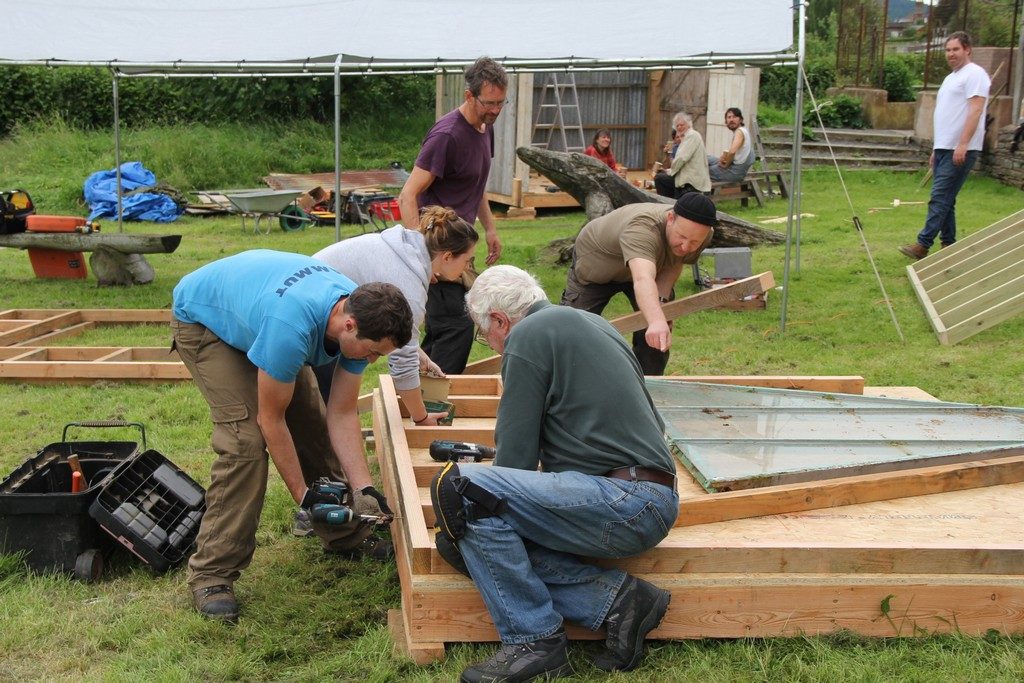 All around us other sheds were taking shape and we were beginning to feel the pressure, and that we’d seriously misjudged something – either our abilities, time, or the quality of the opposition… 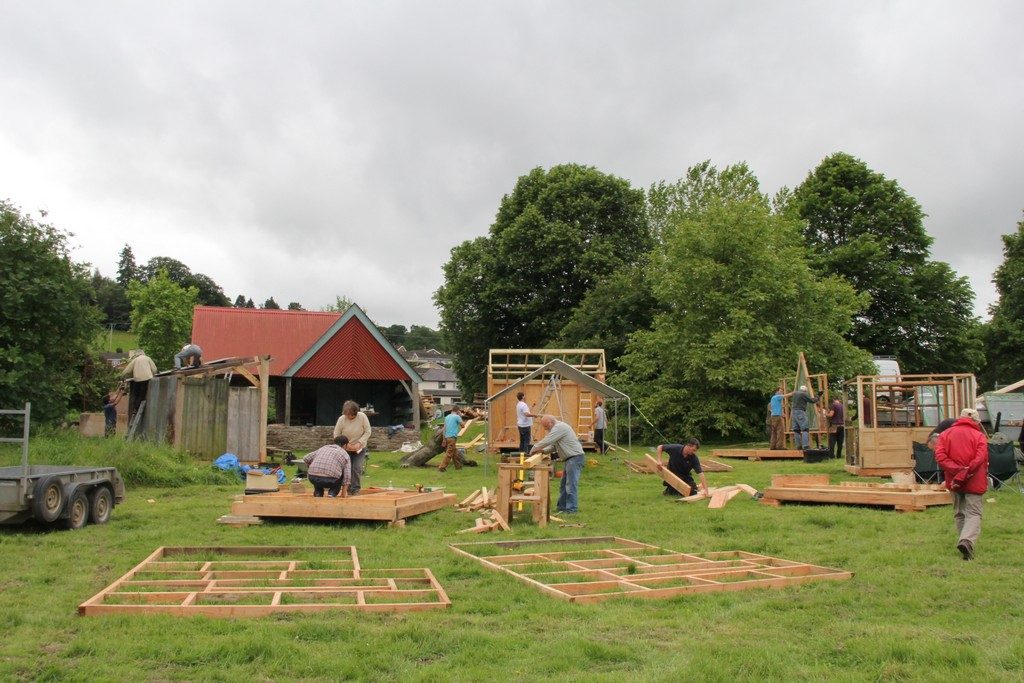 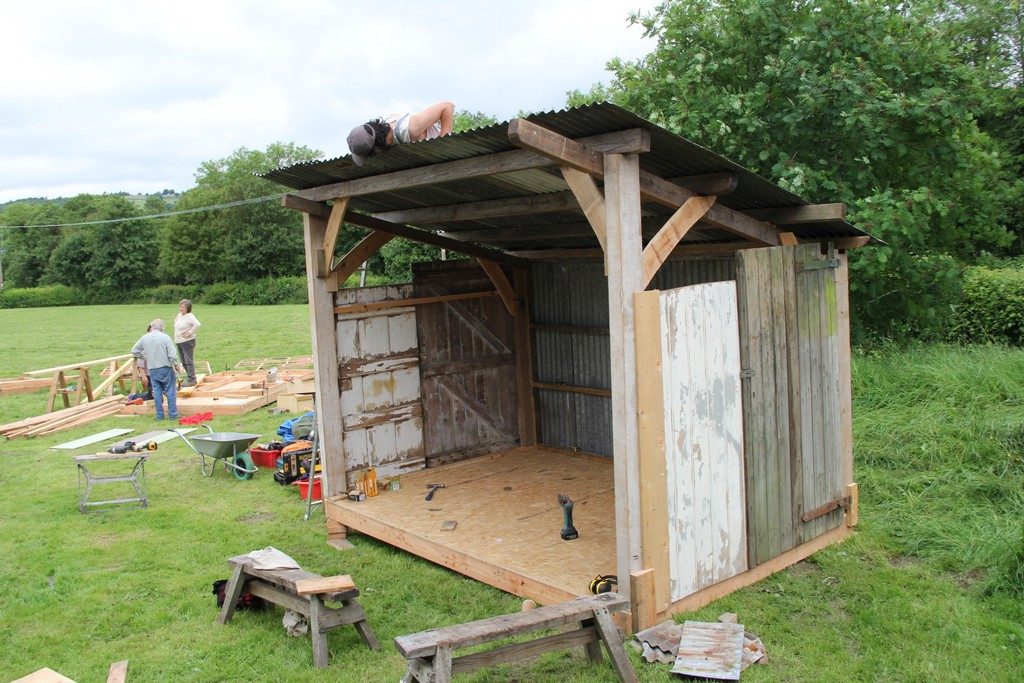 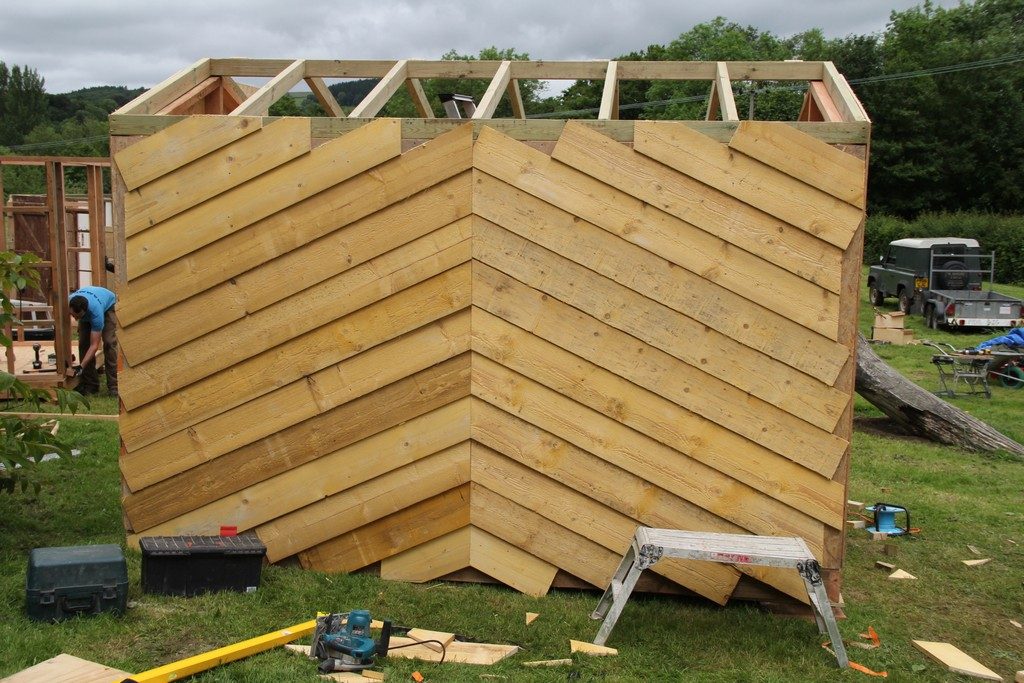 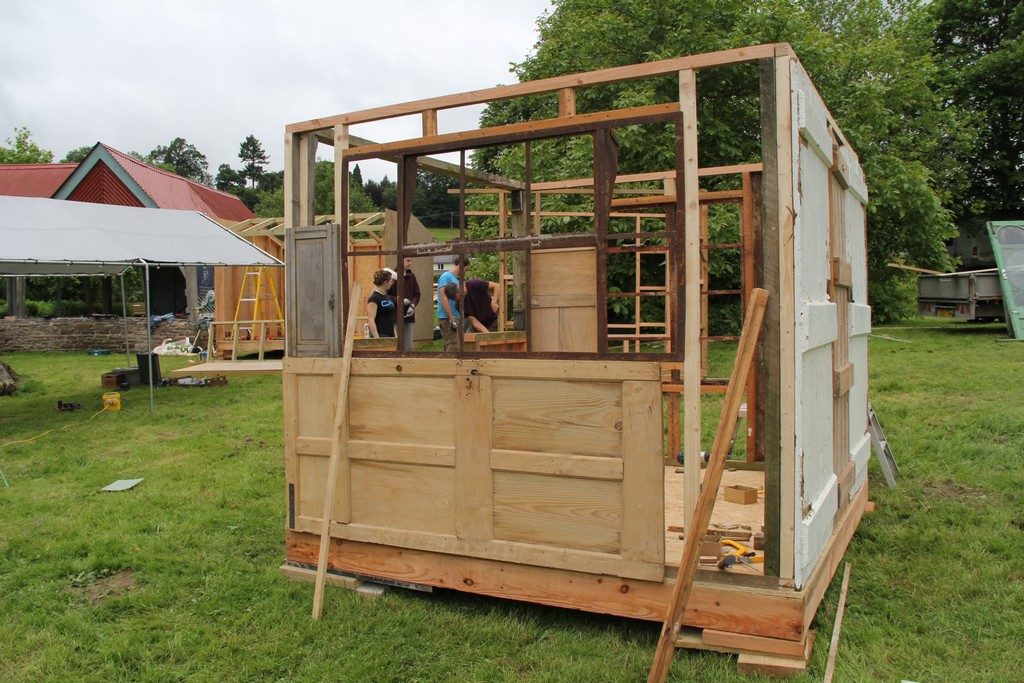 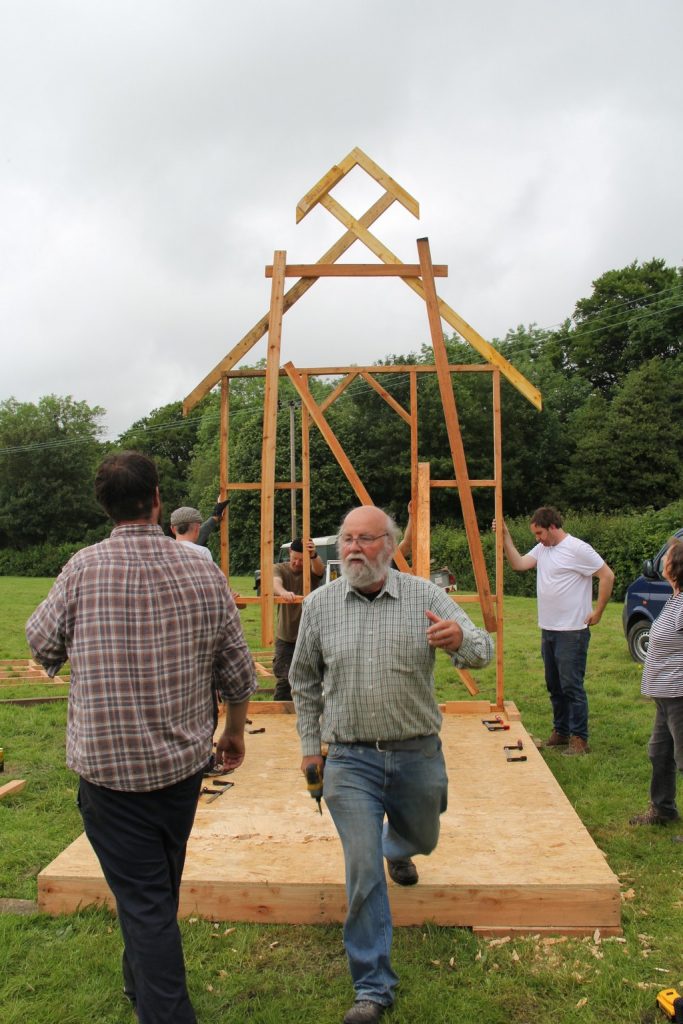 Finally at around lunchtime, we had the genesis of something that might one day resemble a shed and we raised three walls, to a distinct lack of fanfare I might add.

Spirits had been raised by this small sign of progress, and buoyed by some hearty supplies that were eaten on the hoof. 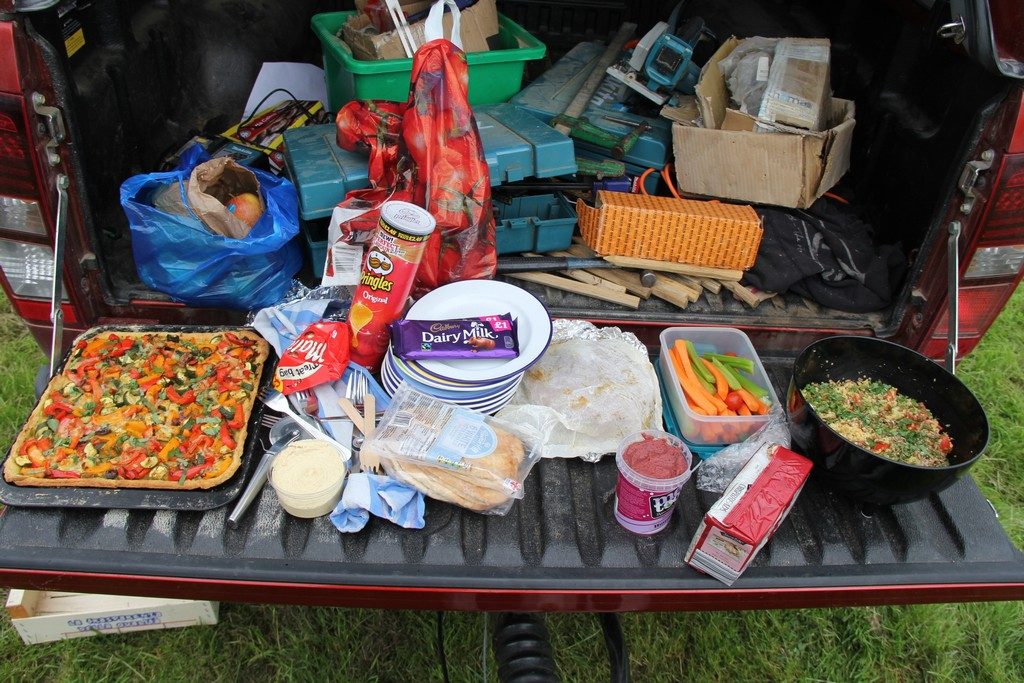 We beavered on into the afternoon, continuing with the studding and inserting the crumbling but stylish windows and door frames. 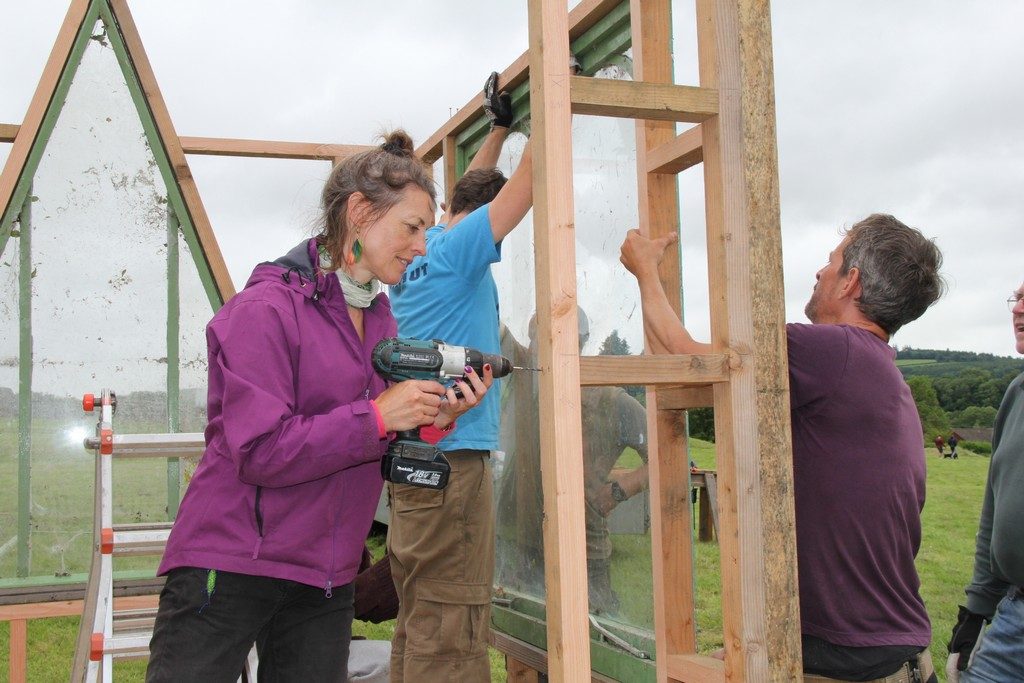 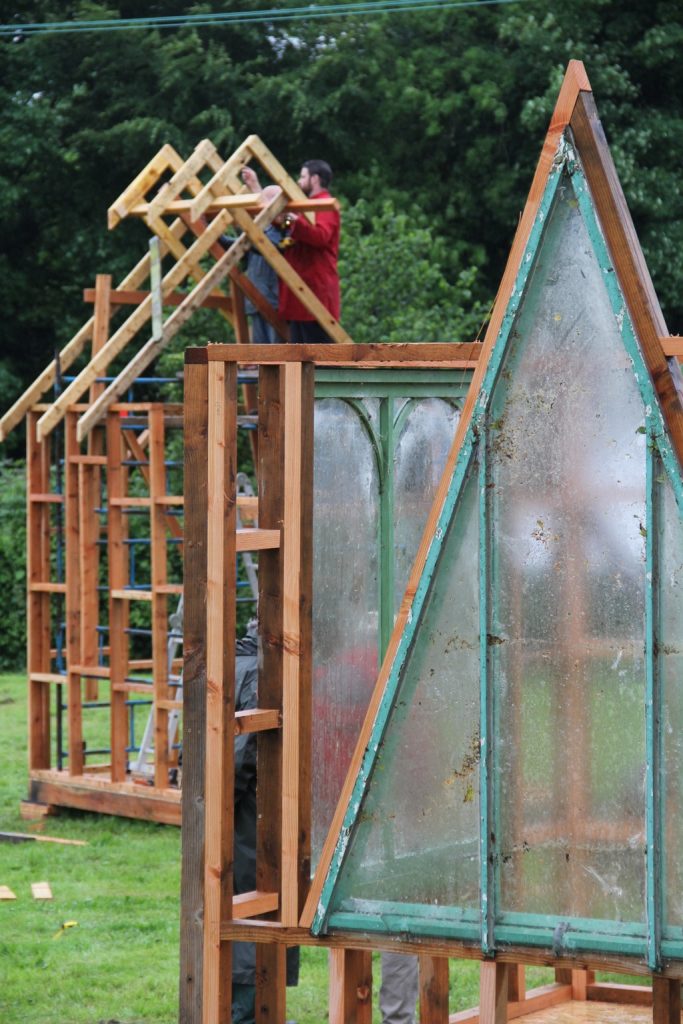 At least now our shed was “lockable” ( we even had a key) although we did have to lean the frame outwards to ensure that the doors could open. 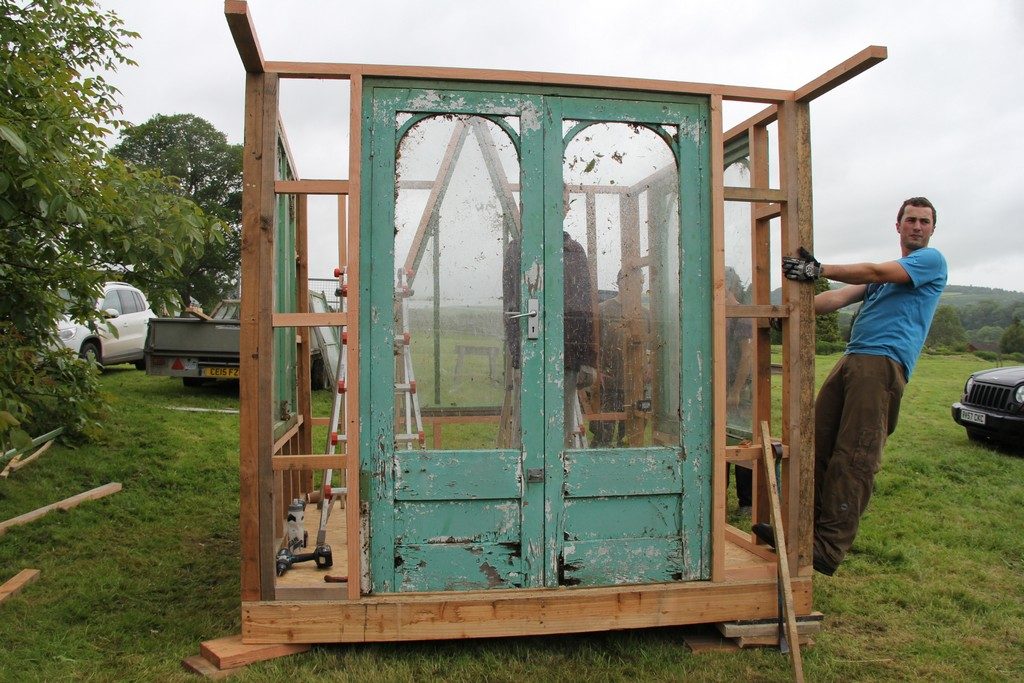 Day one drew to a close, tools were downed and drinks and food were provided in the newly constructed bar.

Competition rules (such as any existed) suggested that no prefabrication was allowed, or the use of any glass. Well, we had ignored the frowned upon use of glass, so, in for a penny….we decided to pooh-pooh the prefabrication clause for good measure and make up the roof trusses back at home. My Saturday (evening) and Sunday morning were therefore not as relaxing as I would have liked, as I frantically endeavored to cobble together some fashionable and eye-catching roof trusses from curved oak offcuts. These were smuggled onto site on Sunday morning by which time everybody was too tired to notice, or too busy, or just didn’t care……I think we got away with it.

The trusses were lifted onto the wallplates, and now we really did have something that was starting to look like something! 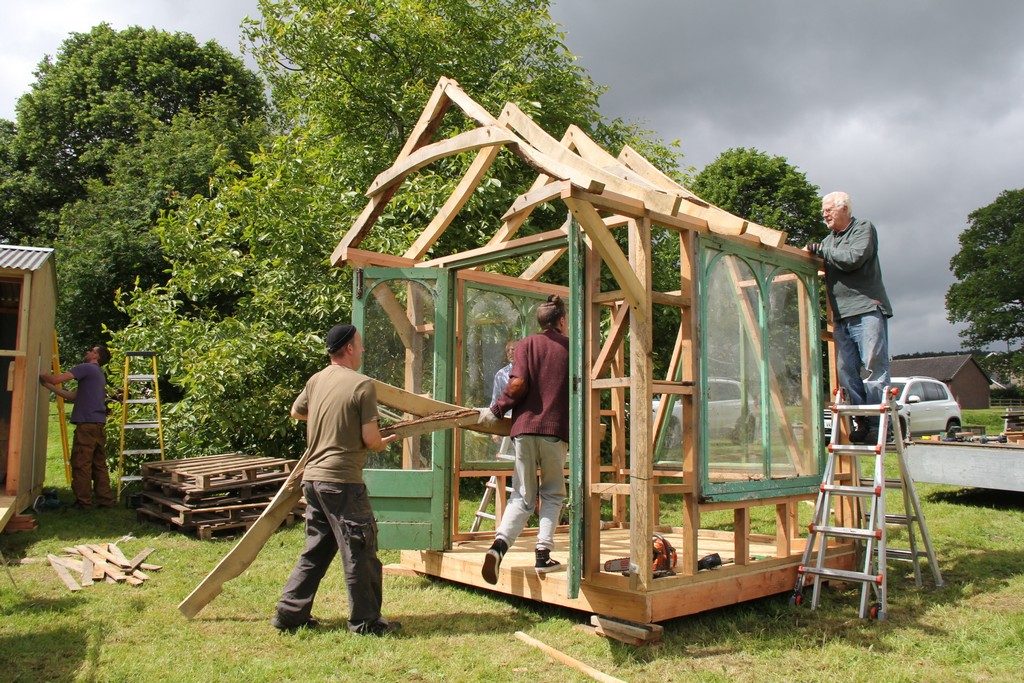 For the rest of the afternoon, everything went beserk as boards were ripped, crosscut, and slapped willy nilly onto the outside of our rapidly evolving construction, 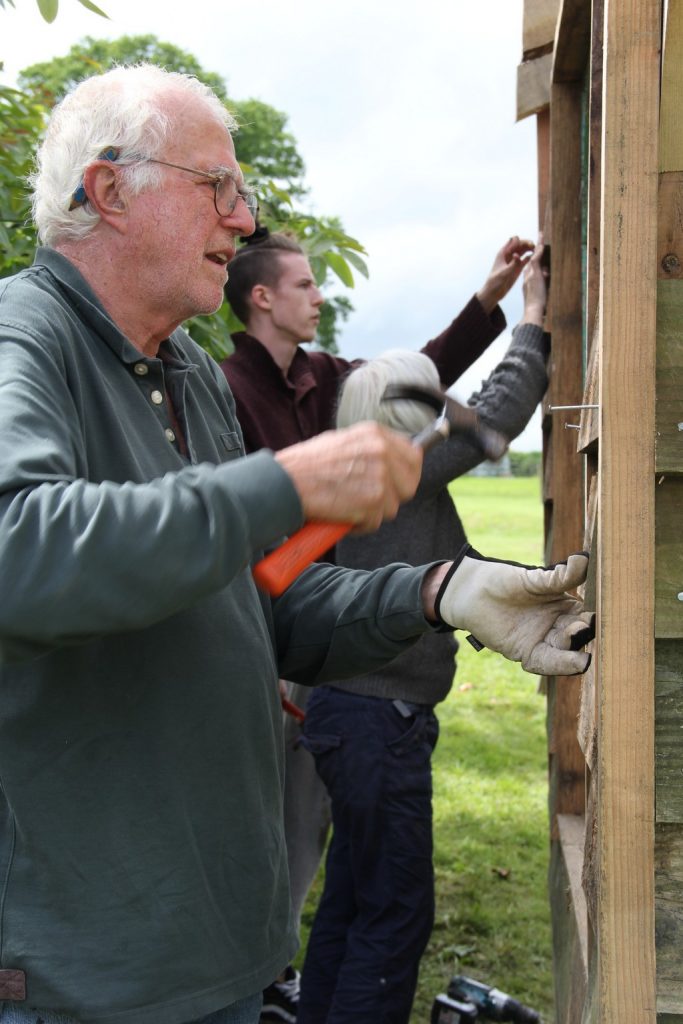 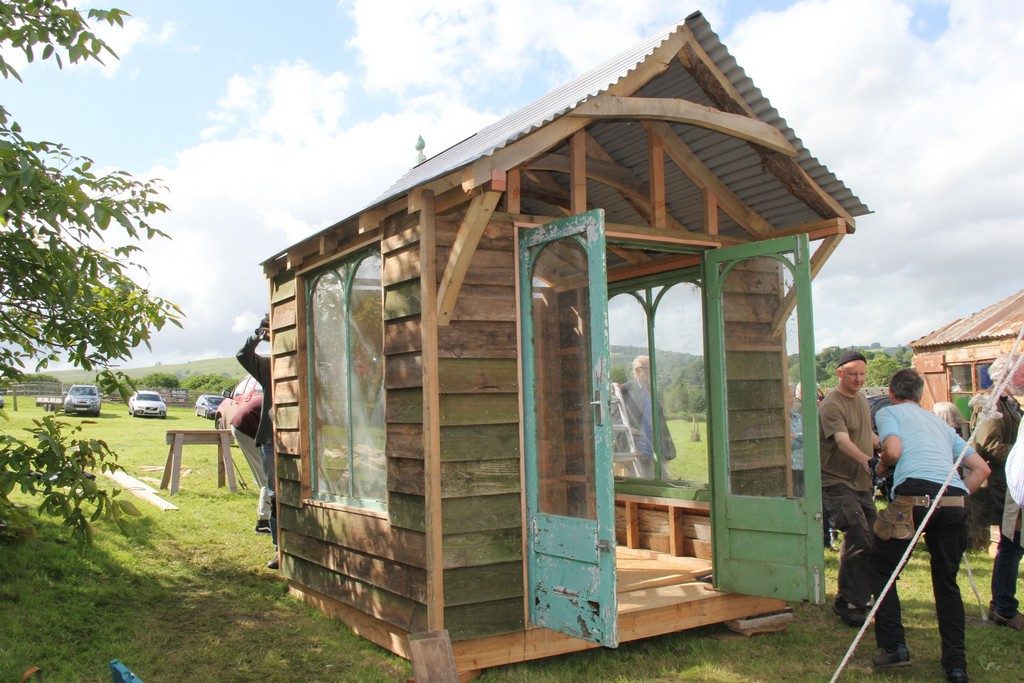 whilst around us the other teams seemed to be in a similar frenzied state. 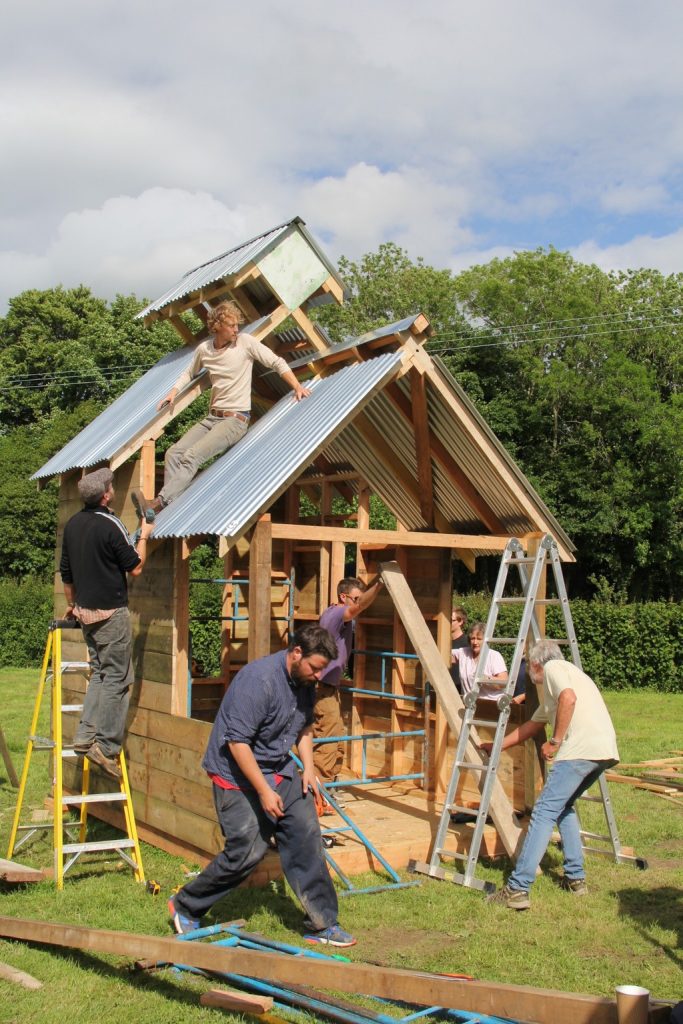 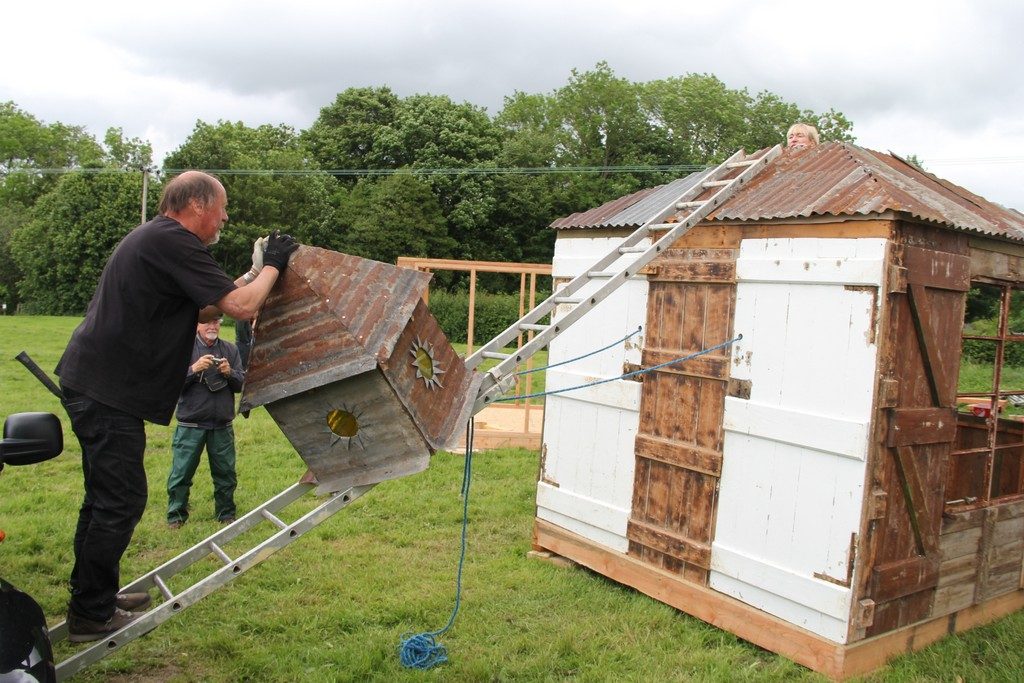 Doug, Coral, Tom, Harold, Peter, Alithea, Dorothy, Jack, Richard and Malcolm put their collective shoulder to the wheel and somehow or other conspired to drag our shed towards a state of presentable completion. A 30 minute stay of grace generously bestowed by the junta of 3 impressively professional looking judges (suited and booted and complete with matching clipboards) gave us just enough time to literally throw on a few sheet of wriggly tin.

The bell tolled. Everyone collapsed in a sweaty heap. Thankfully it was all over. 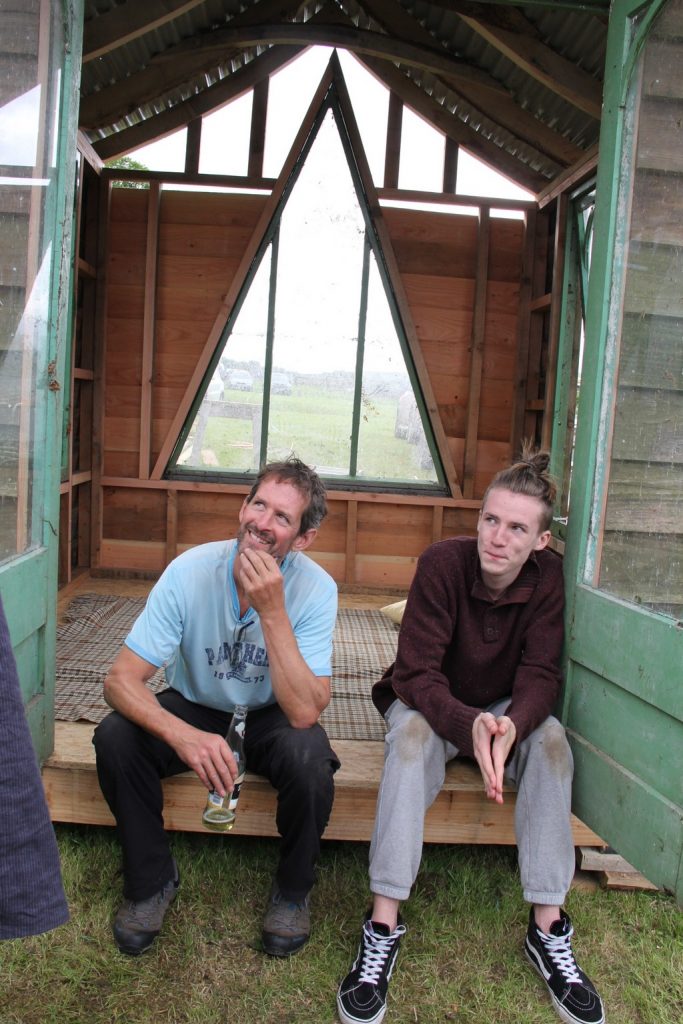 Not quite in fact. Now we had to face the judges’ “interrogation” and discuss the so called “concept” of our shed. 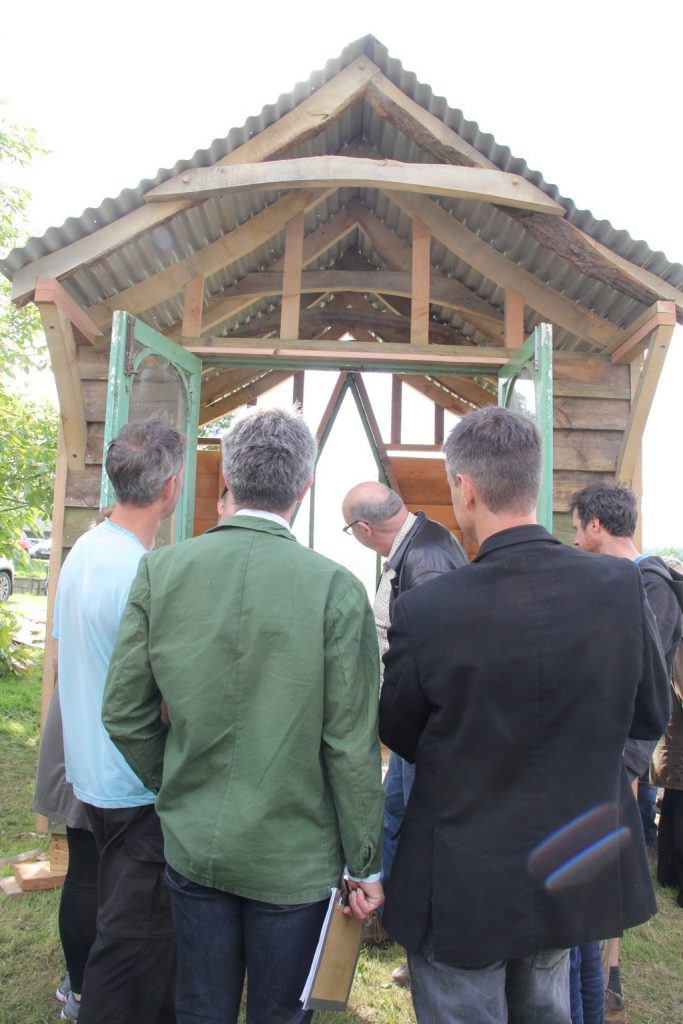 We tried to impress them with suitably sounding words – “recycled….community…..sustainable….creative”,  but I could tell by the impassive and cold look in their eyes that they could see through my flannel. I might just have well have said “we made it up, didn’t we. Isn’t it obvious?”

Suffice to say we didn’t win. Lewers Firth and his brilliant team of nail gunners from Firth Construction pulled it out of the hat with their inspired hinged extravaganza, and their theatrical, musical unveiling, which clearly swung the deciding vote. Worthy winners. 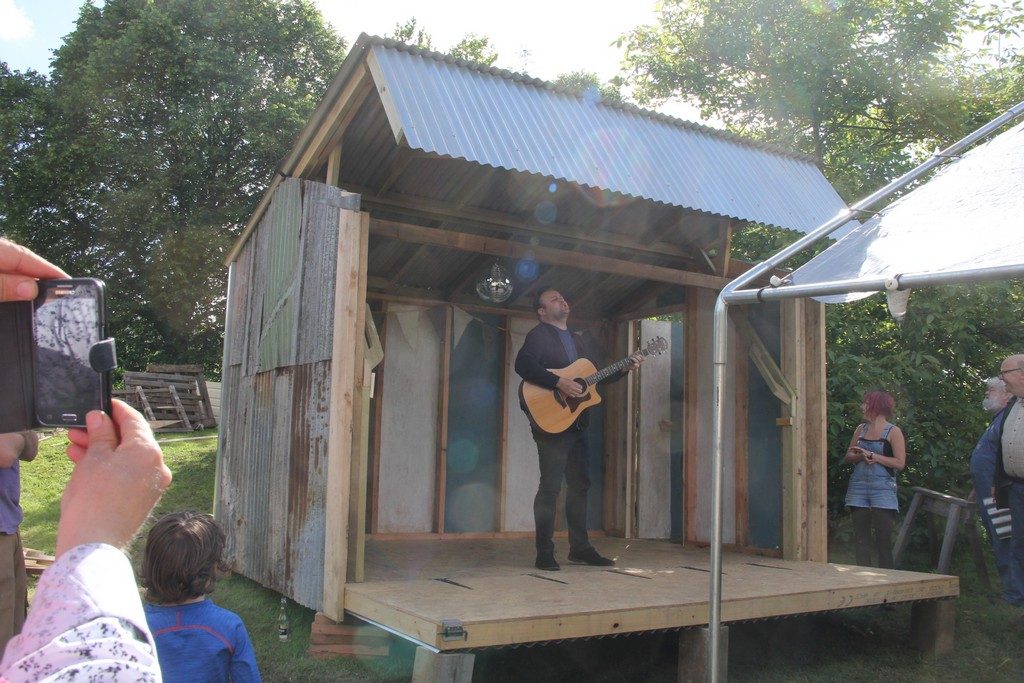 For once, this really was about taking part. 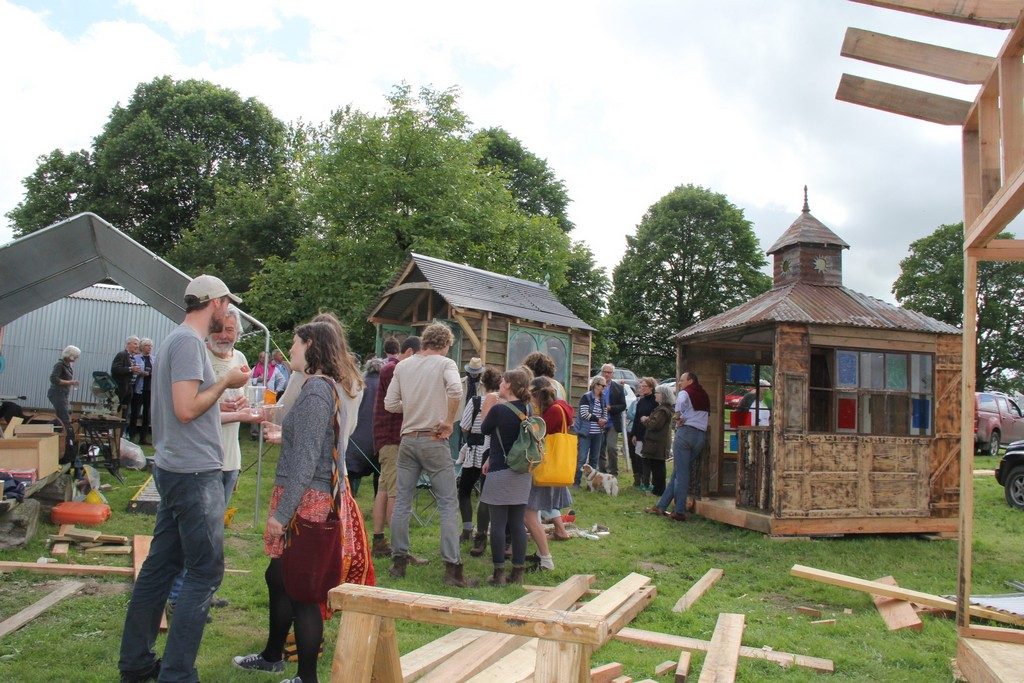 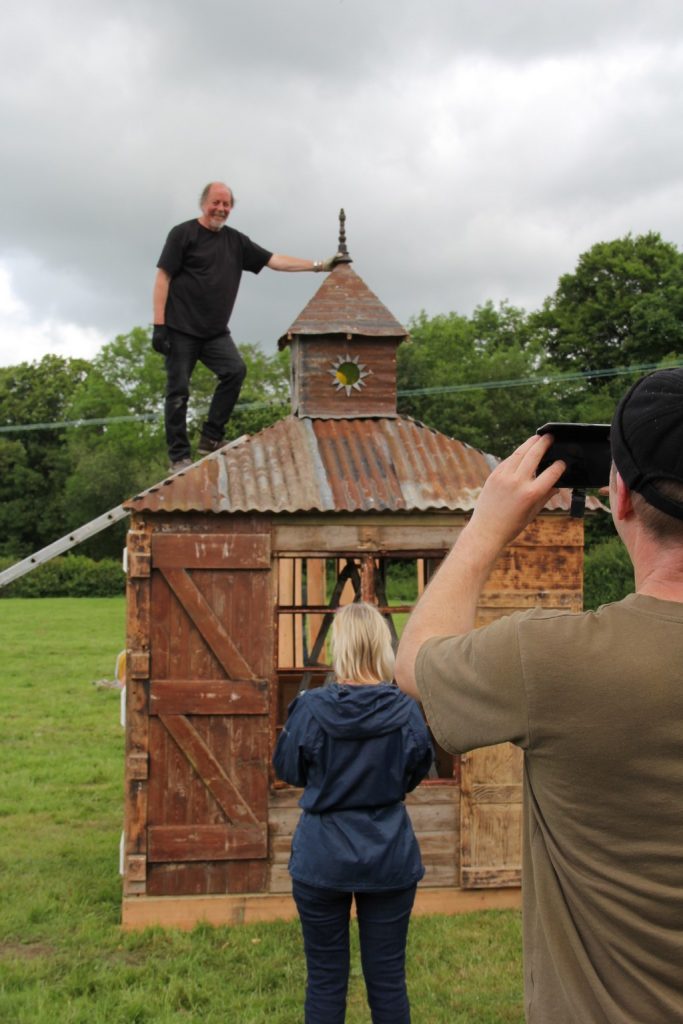 Thanks to everyone involved for a memorable weekend, and don’t forget to come down to the Sheep Music workshop event this weekend which will be using the sheds as venues. 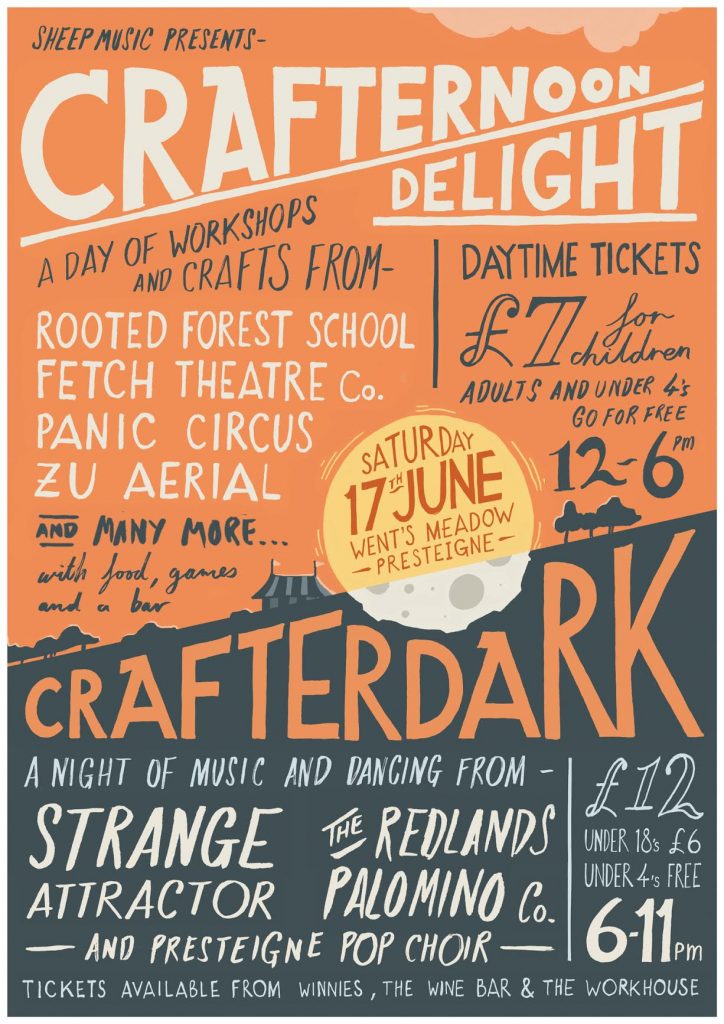