Archive for the ‘Shropshire’ Category

In mid July last year, Matt and Lucy arranged to come and see us to informally discuss the plans for their new build house near Ludlow, and to see if we could design and quote for an oak frame. So began several months of information gathering on their part, as they tried to work out the best approach to the project. Not easy by any means, as they were working full time and new to the idea of building a home.

By November they had made up their minds – to go with an internal oak frame (designed and made by us, yippee!) encapsulated by a softwood insulated frame courtesy of Taylor Lane in Hereford.

Contracts were signed, and now we could get to work with the frame design. Martyn Davies, one of our frame designers put in the hard yards and came up with a design that incorporated all of Lucy and Matt’s ideas, including internal half-timbered wall partitions, an external lean to veranda and a jettied gable.

Inevitably planning to build a house can take longer than anticipated and it took until early February for the frame drawings to be signed off and the oak ordered with a scheduled delivery date towards the middle of March. Of course, we all know what happened then to turn our world upside down. For several days, it looked as if getting the oak over from the mill (open, but only just) in France was going to be an impossibility, but somehow we found a haulage company, a port that was open and unloaded the oak to much relief all round.

By now, Covid had ensured we were down to a skeleton team (actually just Rob in the workshop!) so fabrication took a little longer than usual. This worked out well for Matt and Lucy, who were able to get ahead with the groundworks, whilst simultaneously having their first baby. Congratulations!

A couple of workshop visits to see the frame in progress whet the appetite and kept spirits up and before we knew it, we were readying ourselves for the raising at the end of June, nearly a year since the process began.

The scaffolding was erected and the oak delivered to site ready for an anticipated 2 days on-site. Now we just needed some good weather. Well, we needn’t have worried about that. The temperature nudged 30 degrees on both days with barely a cloud in the sky. Thankfully Matt and Lucy kept the Castle Ring team of Jake, Debbie, Adam, and Rob hydrated and fed with cold drinks and fine food all day.

By the end of the first day, we had met our goal and got up to wallplate, spending the last half an hour knocking in a plentiful number of pegs. Matt and Lucy were so enamoured of their half-built oak frame, they had an evening meal in the hallway.

Day two of a raising can be tricky as everyone is feeling the effects of day one. But we kept moving forward, assembling the trusses and lowering them into place one by one.

By lunchtime all that remained were the spline-jointed purlins, wind braces and ridge timbers and by 3pm we had sent our crane driver packing, with all the heavy lifting done and dusted.

This is the point where the pressure eases and you can start to relax and enjoy the frame. I say relax, but there are still hundreds of pegs to hammer in. Matt joined us for the whole raising and will always be able to say he helped put his house together.

We saved the best for last as Matt and Lucy clambered up to the ridge to “top out” the frame with a sprig of oak. Topping out is the way we bring the raising to a fitting end and say thank you to the trees that have gone into making the frame. It’s also a good photo op!

As raisings go, it really couldn’t have gone any smoother. All that was left to do was for the team to wearily climb the scaffold one last time and toast Matt and Lucy with a cold beer. Good luck with the rest of the build. We have no doubt you’ll do a brilliant job.

Chris and Wendy were stepping back from running their busy campsite at Bishops Castle and commissioned a simple, single storey oak framed annexe from us in the Spring of 2017. We helped them prepare planning drawings and then designed a 3 bay structure with a low ridge height, the oak frame fully visible internally to be sheathed with an insulated softwood envelope.

We began to manufacture the frame at the beginning of August and 3 weeks later were ready to go to site for the raising. 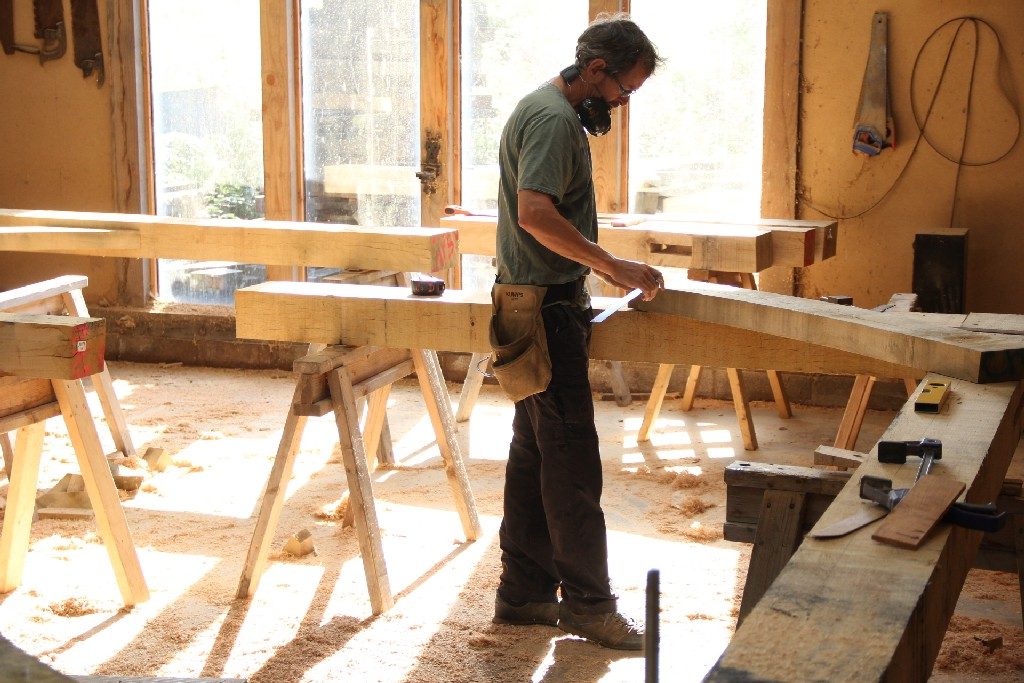 Rob working on the frame in the workshop 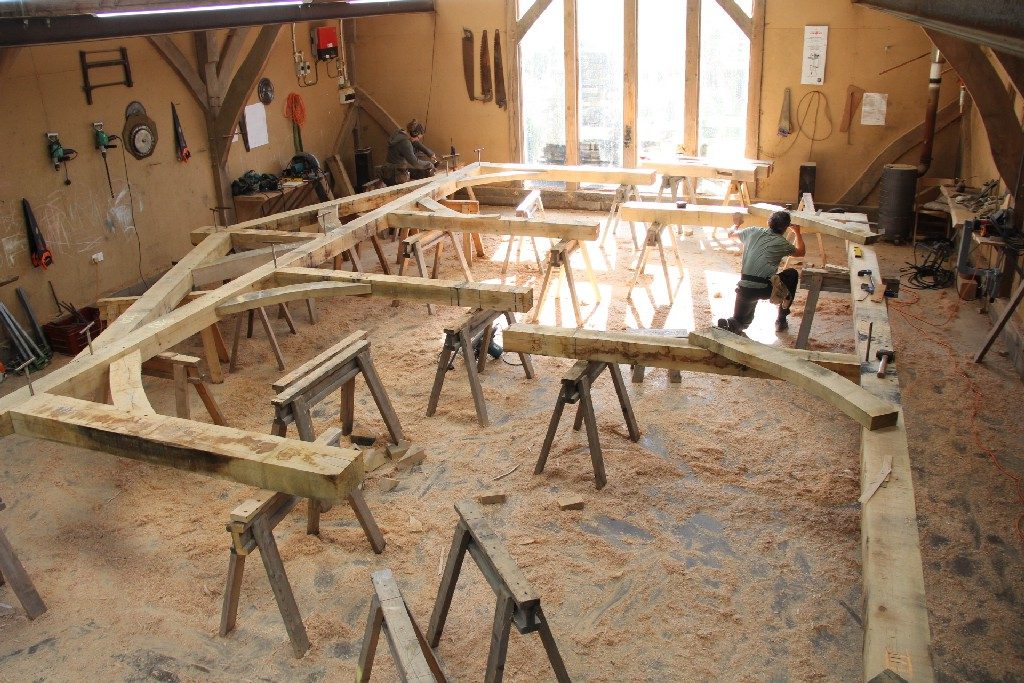 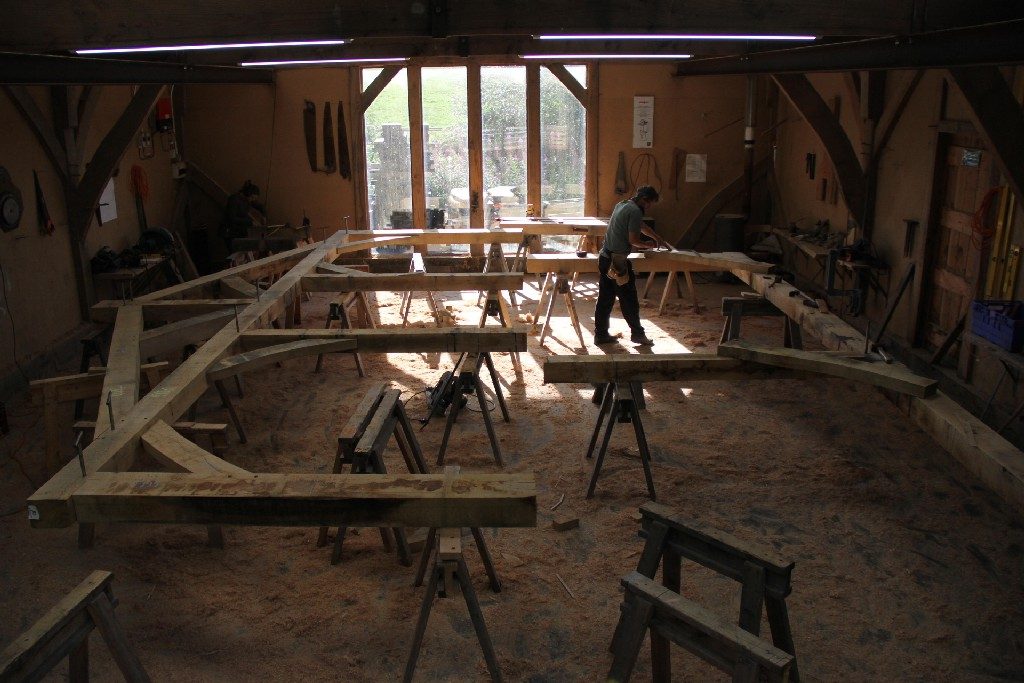 Chris and Wendy had prepared the base, and erected the perimeter scaffolding and we were able to crack on with the raising in no time at all. 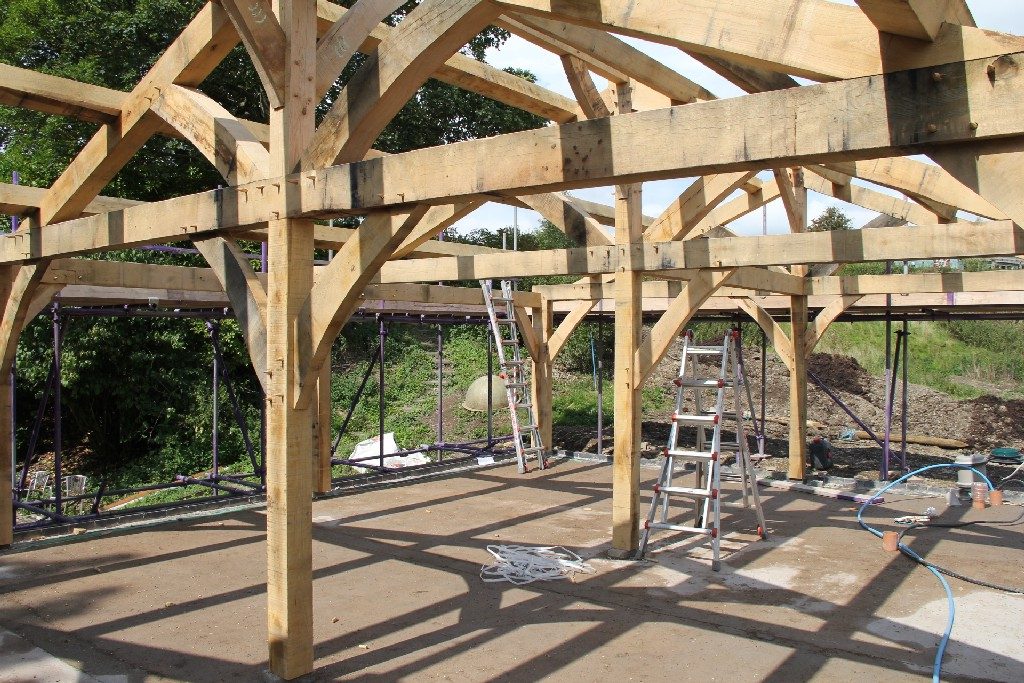 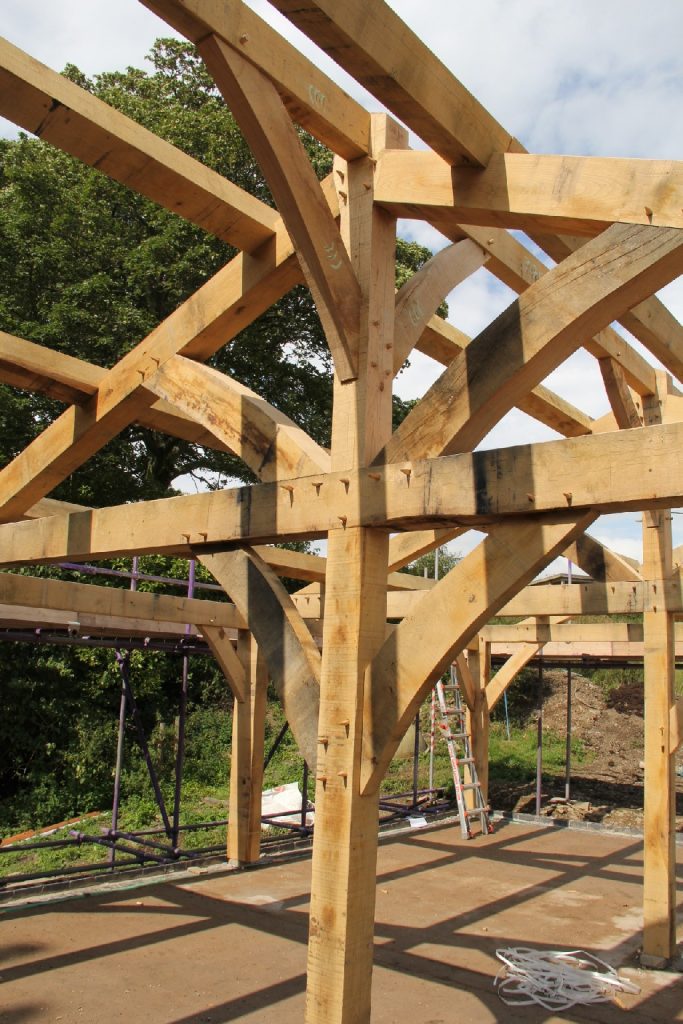 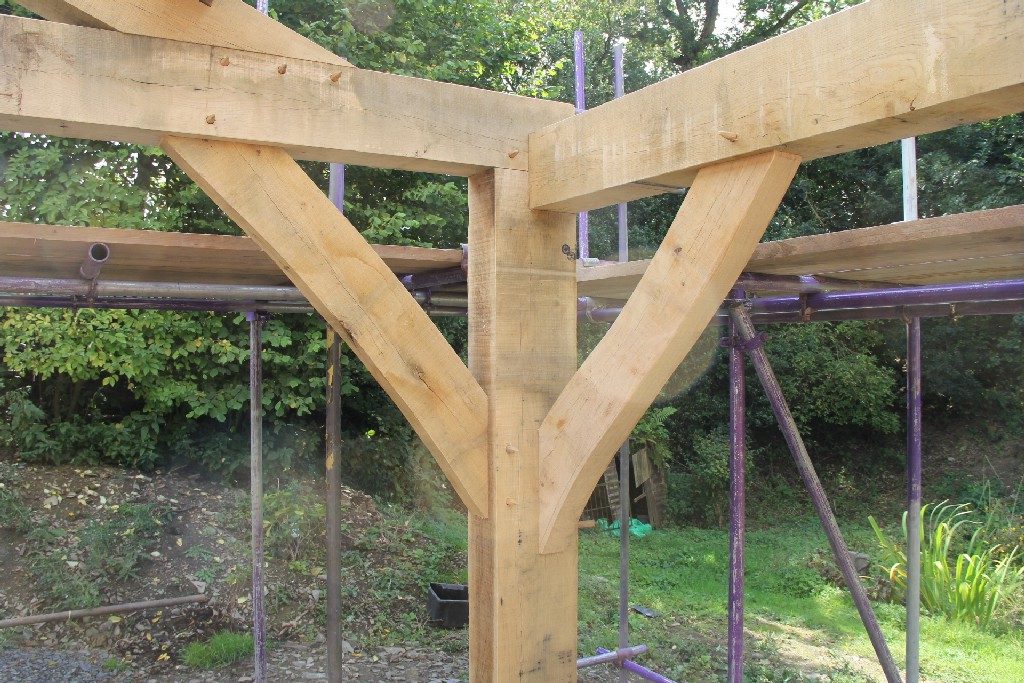 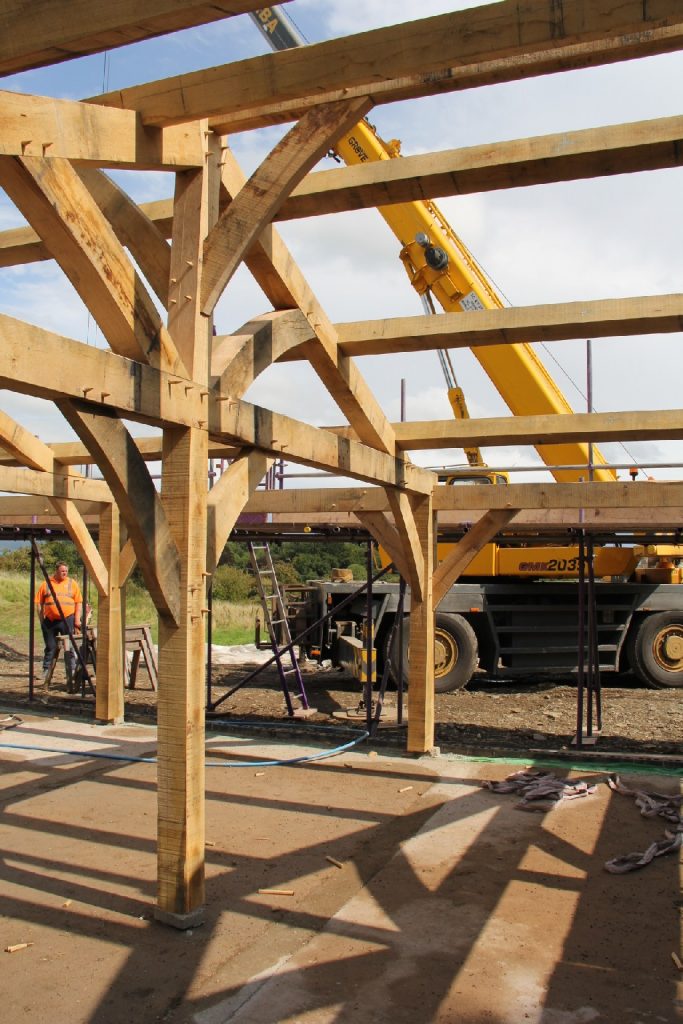 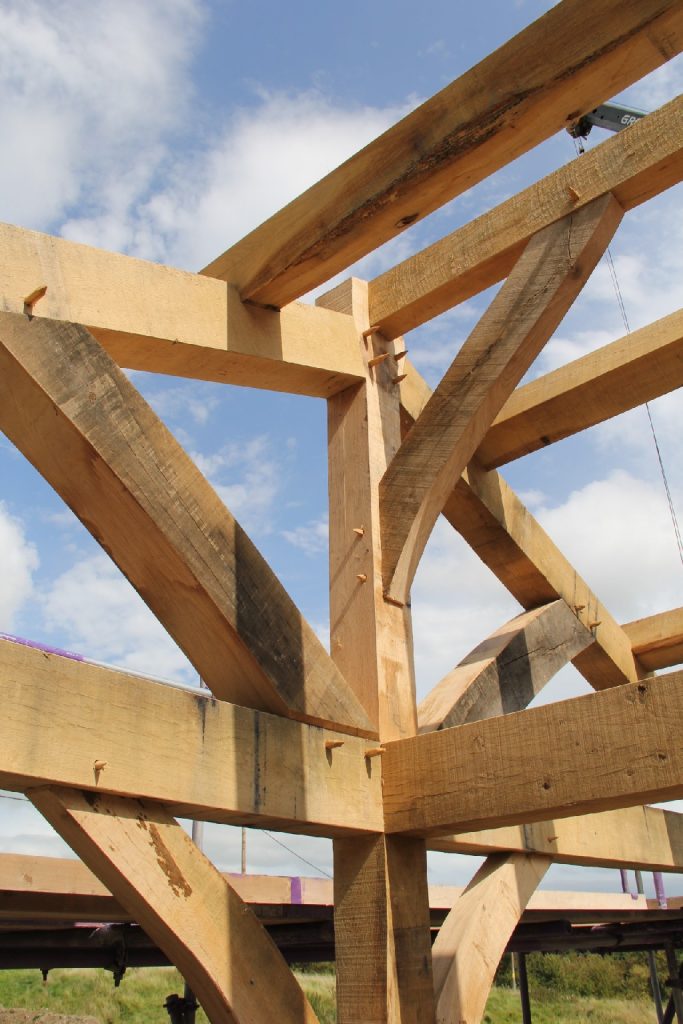 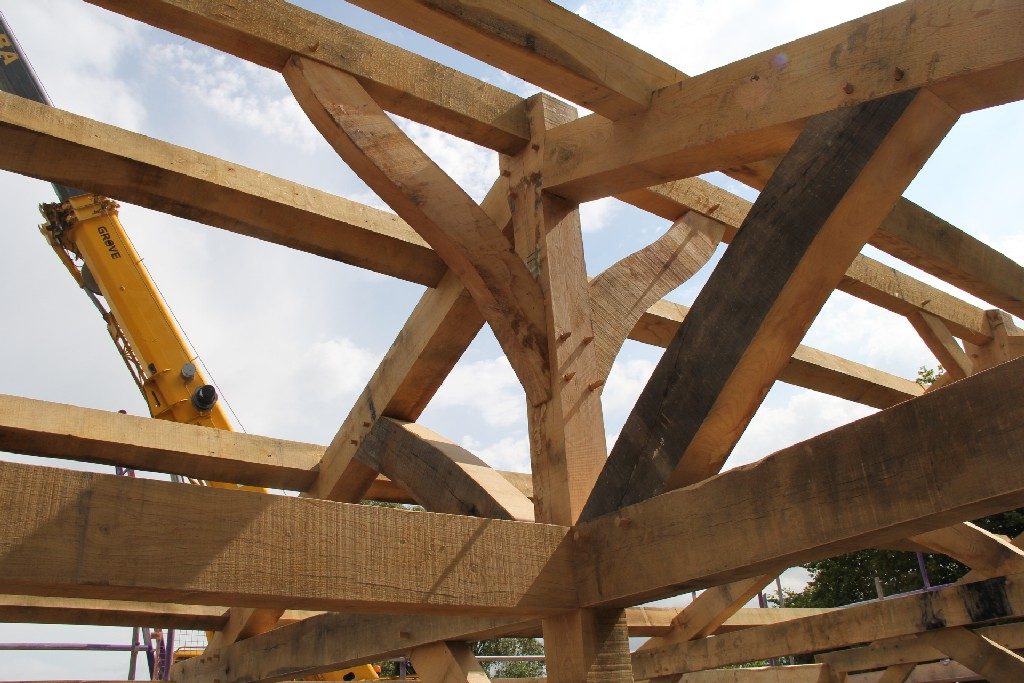 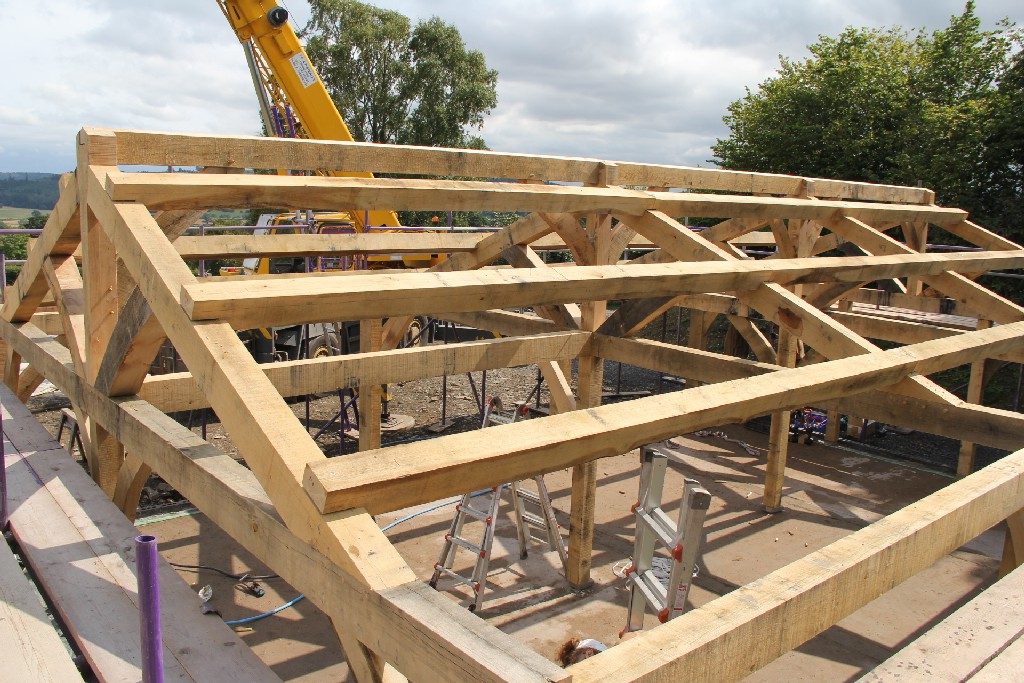 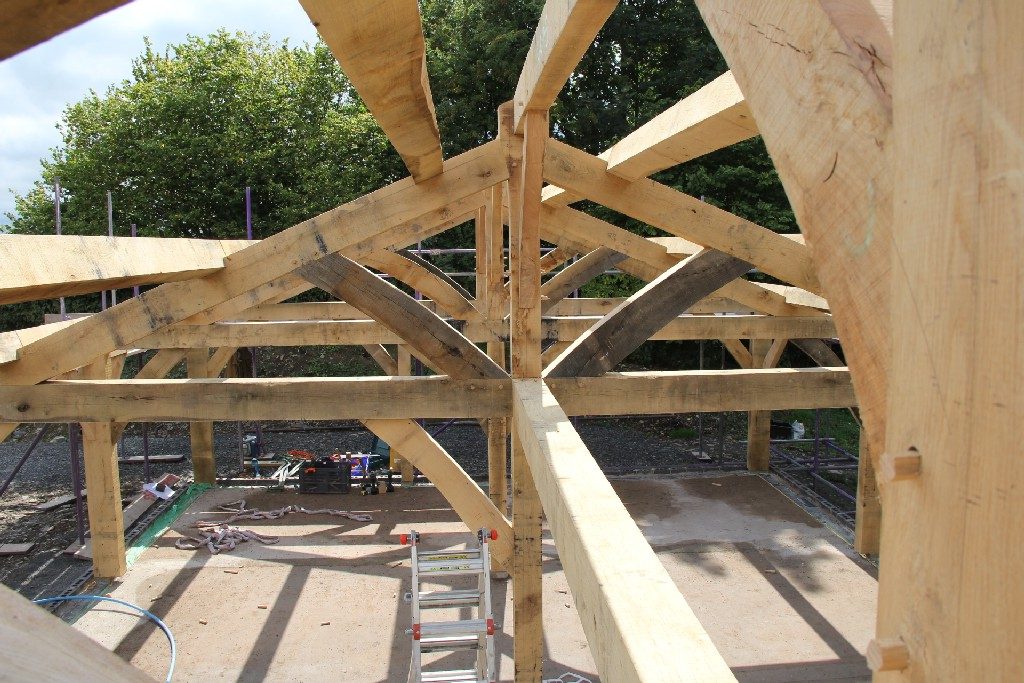 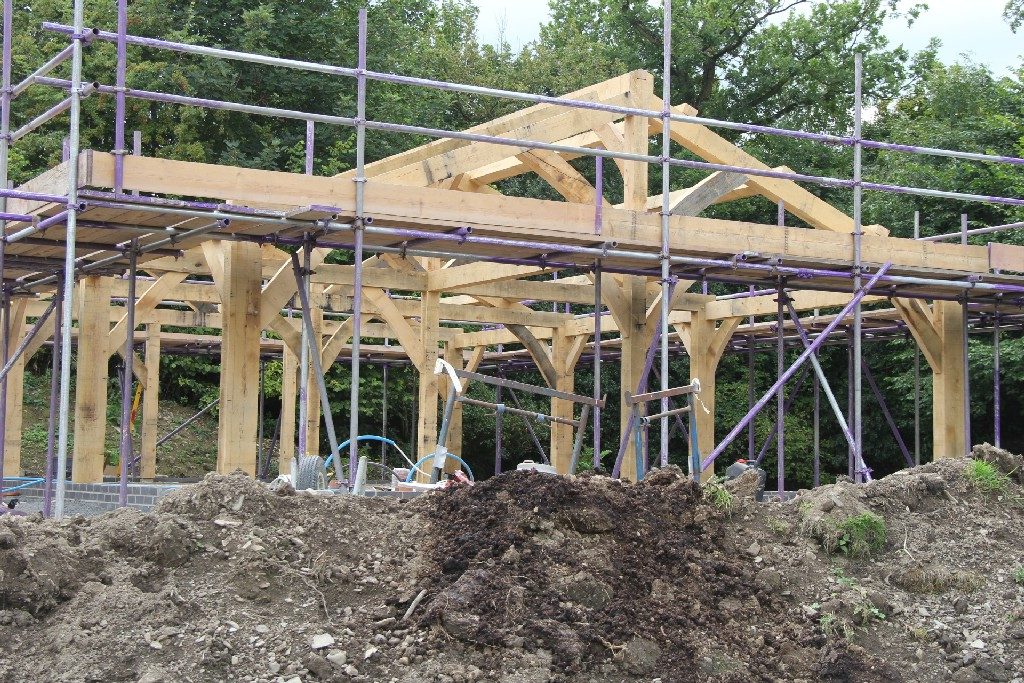 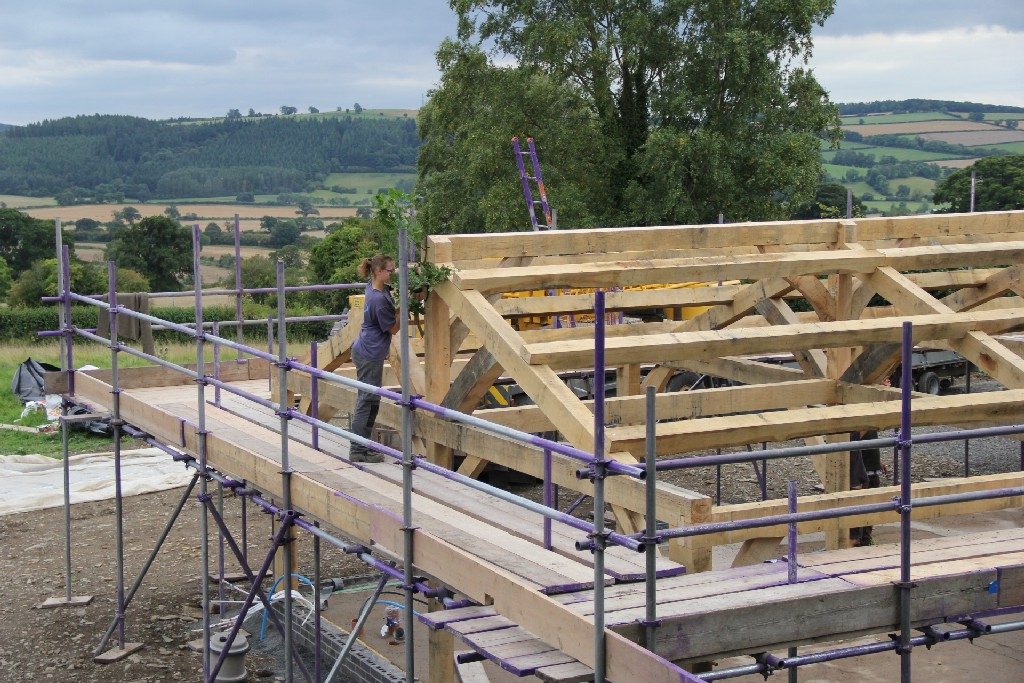 Edeline topping out with an oak branch

Unbelievably, by the end of October, Chris and Wendy were able to move in! Who said self-builds always take longer than you think? The key for these whizzer clients was knowing exactly what they wanted, and having the right tradespeople lined up to keep the build schedule on track, and on budget.

I popped in last week to see the results and was more than impressed with their spacious, quirky and comfortable home. 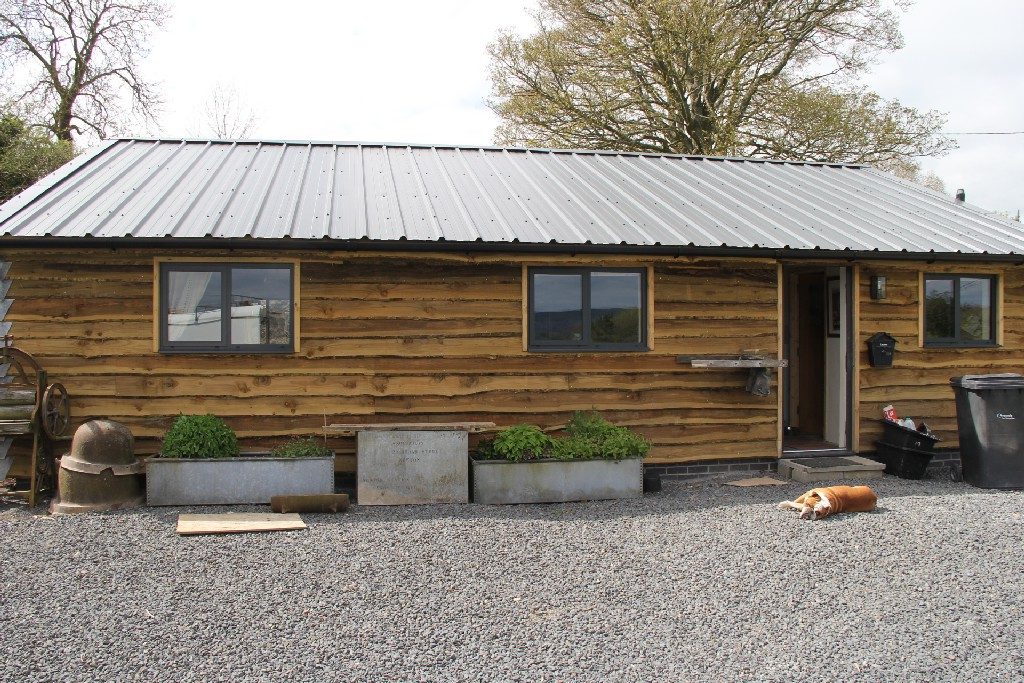 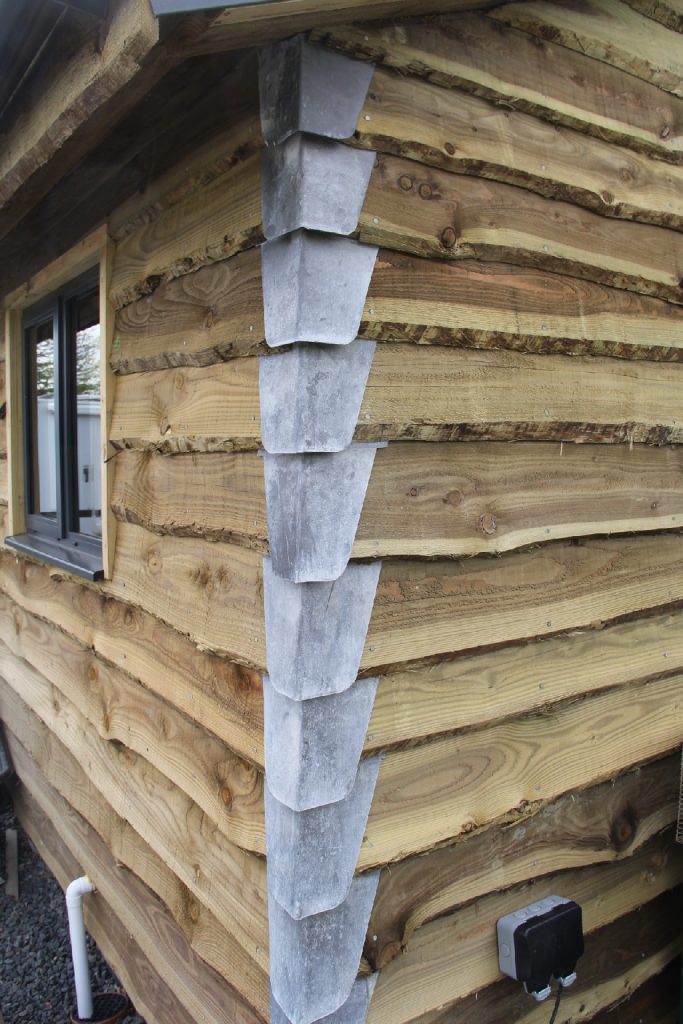 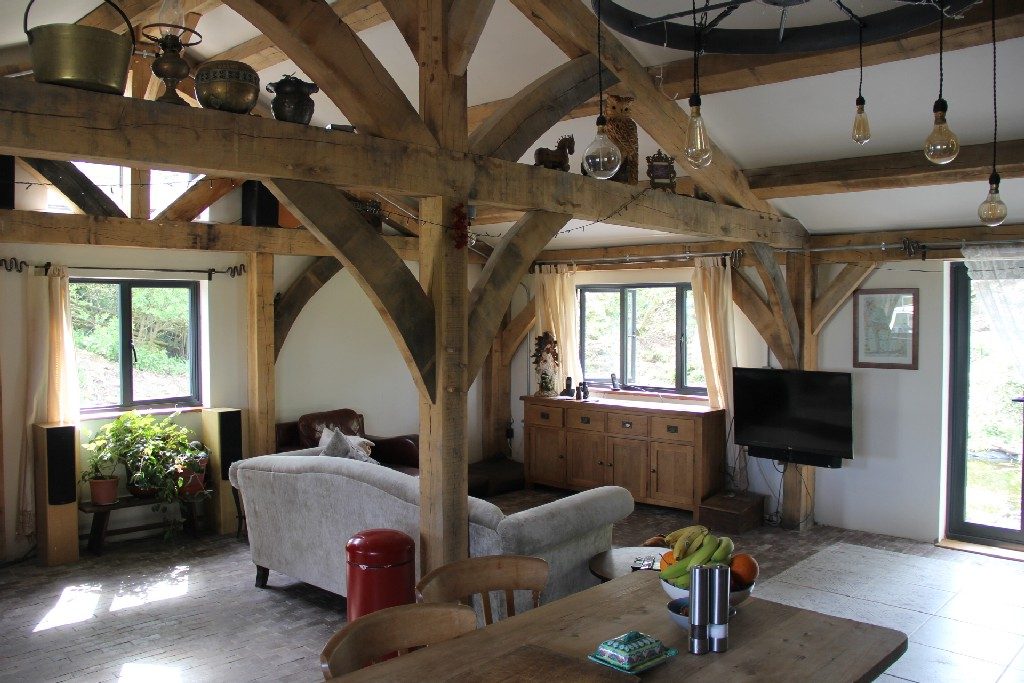 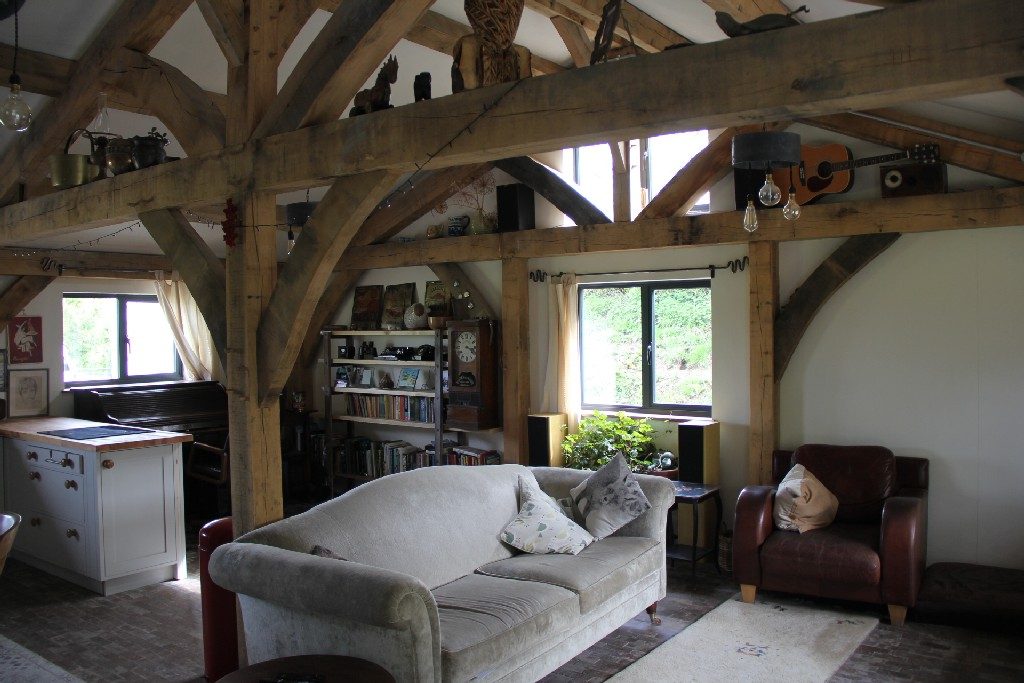 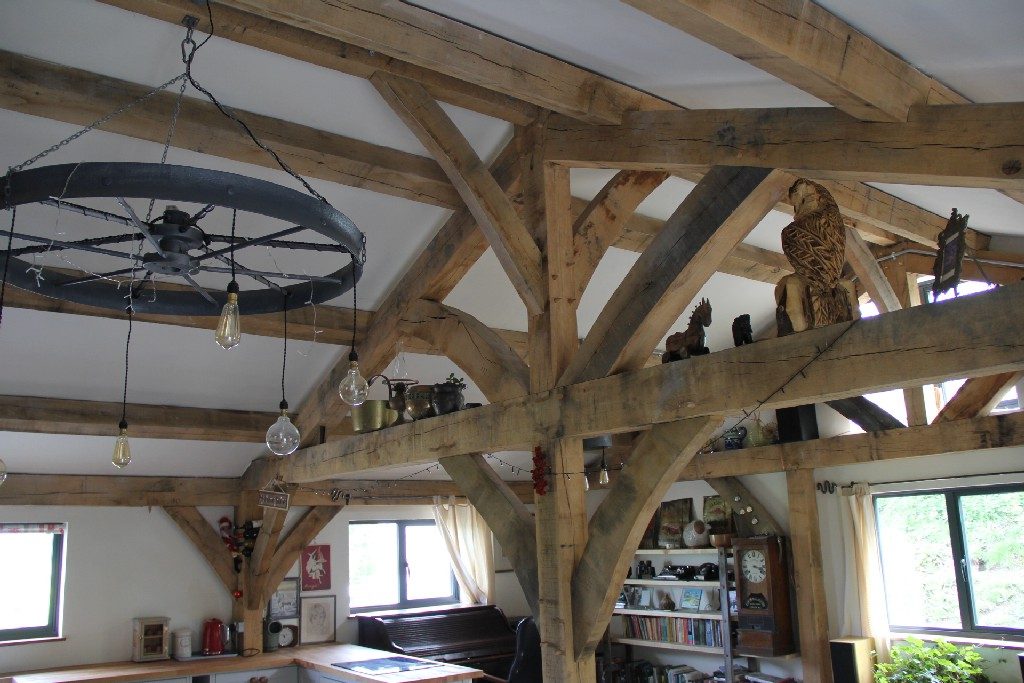 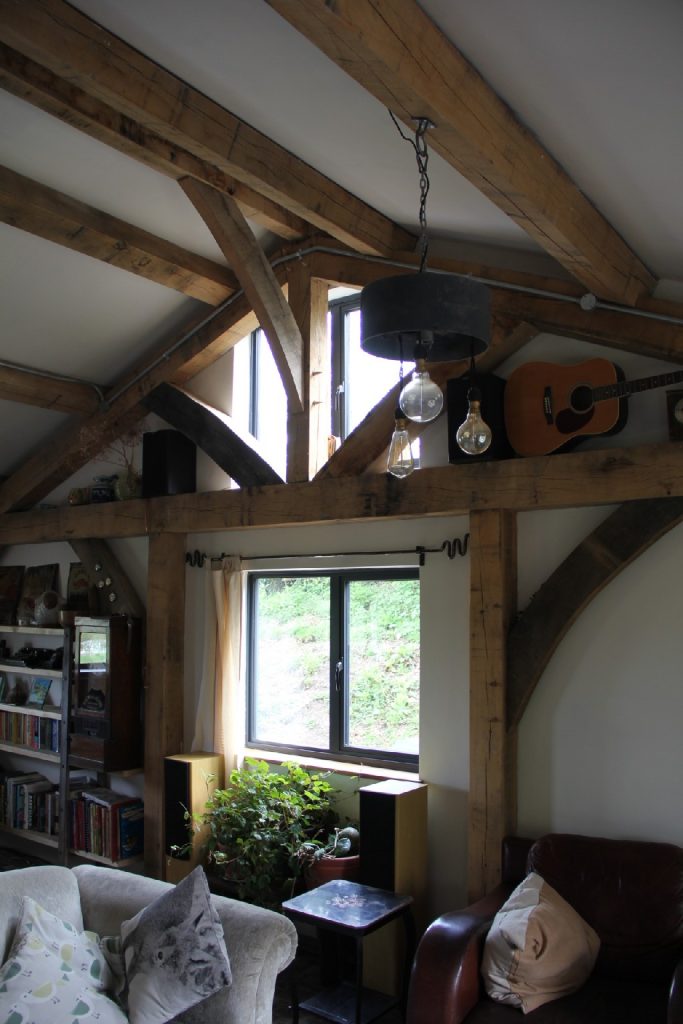 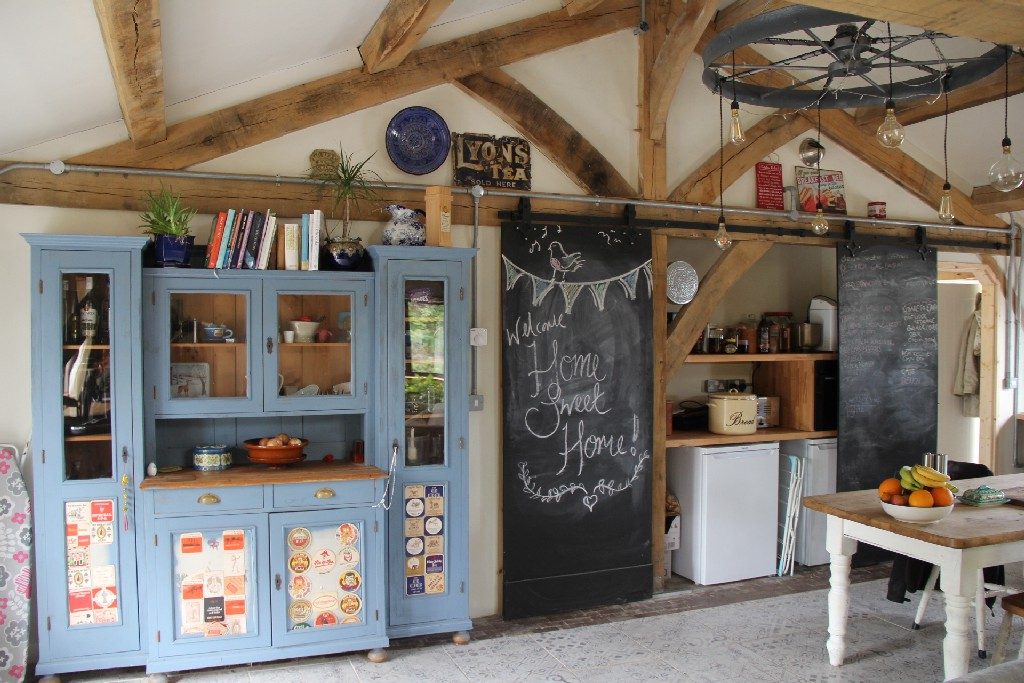 Colourful and creative use of space – blackboards for doors! Also notice the industrial electrical ducting 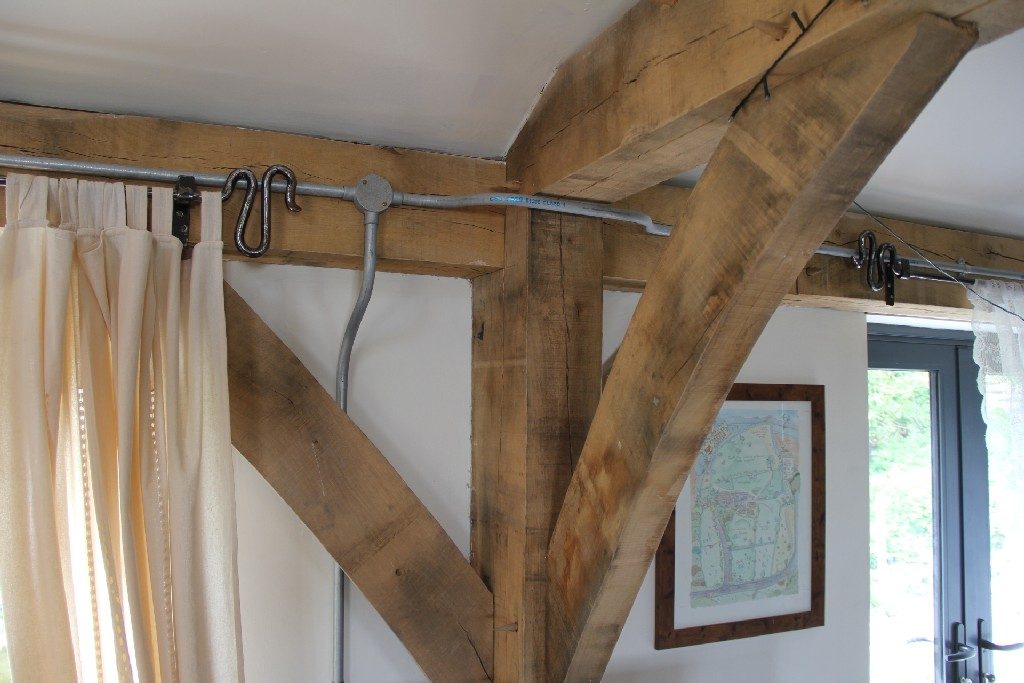 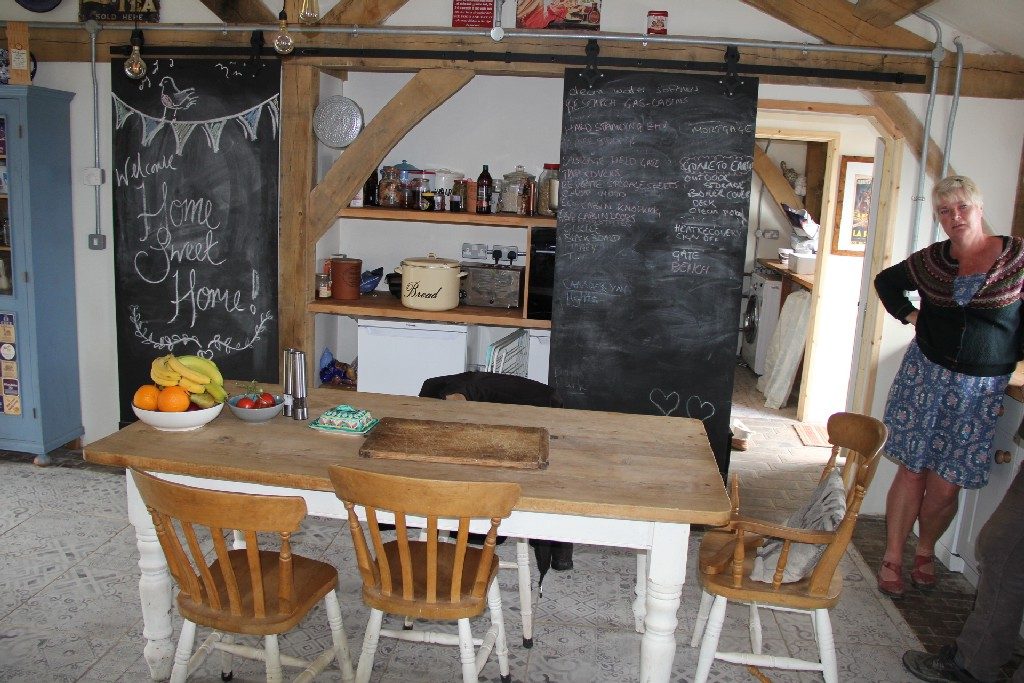