Archive for the ‘Uncategorised’ Category

Isn’t it lovely to be out there doing stuff in the clear spring sunshine and to be able to forget all about Covid life for a few days!

Last Thursday and Friday we rocked up on site just down the road in Weobley, of all places, to raise Paul and Susan’s new oak framed home.

I say Weobley of all places, as Weobley is high up on the list of Herefordshire’s finest black and white villages which showcase centuries of staggering traditional timber framing. Apparently, King Charles I spent a night there in 1645 (possibly to sample the fine Indian takeaway at the Lal Bagh), but then again Charles got around, and spent a night practically everywhere in England. Rumour has it he that was even spotted at Beggars Bush, just down the road from Castle Ring, but it’s late, and I might have just made that up.

Either way, Weobley is well worth a visit, especially to take a closer look at its stunning architecture.

Continuing in the tradition and adding to it, is a strange and wonderful feeling even if the oak framed houses we build nowadays showcase the oak on the inside only. Although half-timbered buildings look great, they tend to be terrible things to keep water-tight and air-tight, and we gave up trying years ago. Our oak frames sit inside an insulated envelope and stay warm and dry. There will be some oak on display externally though – a porch and sunroom – hinting at what’s within.

Paul and Susan’s house project as with many oak frames, was a long time in the making. If memory serves, it took about two years from initial discussions to the point we reached on Friday. But no matter, good things come to those that wait. Paul is project managing the house build and oversaw the groundworks using his building industry experience. Scaffolding was erected and the oak delivered to site ready for the off on Thursday morning.

Raising day nerves never seem to diminish despite the hundreds of frames we have put up over the years, and sometimes it seems an impossible miracle for everything to align. But align they usually do, and align they did again in this case.

Jake, Jack, Sylvan, Rune and Rob worked tirelessly for 2 days in the bright April sunshine, bringing to a culmination two months of carpentry in the workshop. Susan kept us fed and watered, and in the warm evening sunshine on Friday, we were able to step back and admire the fruits of our work. 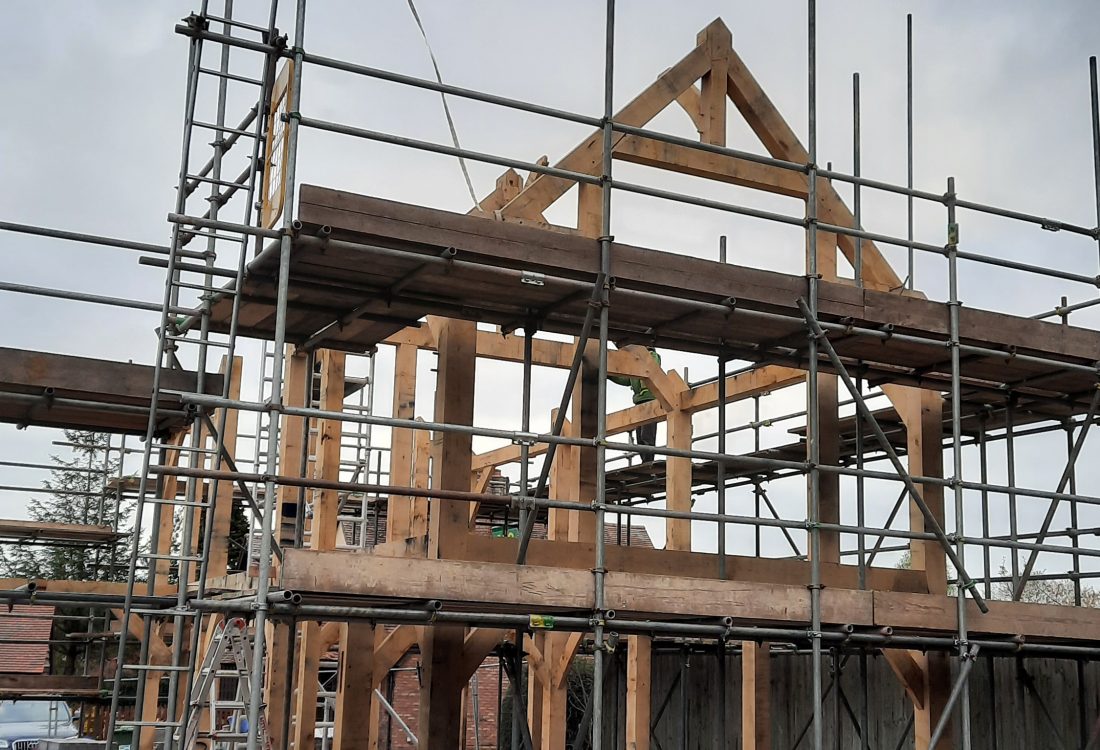 Graham and Philla were planning to build a family house on a large plot on the outskirts of Bedford and dropped by our stand at the NEC Homebuilding and Renovating Show in the spring of 2019 to show us the plans and discuss ideas. There was talk of a full oak frame with encapsulation, along with ICF (insulated concrete formwork) walls with an oak framed roof, and quite possibly various other options too including, as memory serves, lego bricks, breadsticks, and car tyres, although I may have made up the last bit…

With so many ideas, we wondered whether this particular enquiry would ever come to anything, especially since Graham was busy managing his thriving sound design and audio company in London. It seems we made a suitable impression with our “we’ll have a go at anything” attitude, despite competition from the big beasts of the timber framing world. There then followed a period of six months or so as Graham refined his build route choices while we quoted accordingly. The breadsticks and lego were ditched (wisely) in favour of traditional cavity wall construction with a large vaulted oak-framed roof.

As is the way with most projects, it took a while for things to get going, and we didn’t start making the frame until Graham had begun work on the masonry walls back in September.

Graham was concerned about the final truss spacings, and so we held off framing the purlins and ridge beams until the very last minute. Indeed so last minute that I remember calling Graham from the workshop to ask him if he’d made his mind up yet?

Eventually, we were ready to ship the timbers to the site and trundle across country to Bedford, wherever that was.

Turns out Bedford is quite a long way East and a little bit South, but Jake and Rory and I found it last Wednesday and readied ourselves for a busy day on site. The forecast was clear but with the likelihood of a strong breeze – not what you want to hear when you’re using a crane with a 37m boom… A wind speed of more than 9.8m/s will shut the lifting operation down straight away so we had our fingers crossed.

Not all of the eight trusses were the same, and some had raised collars that needed reinforcing with stainless steel threaded rods to mitigate the outward thrust at the wall plate.

Thankfully Chris the builder and Graham had got their measurements correct, and we made speedy progress assembling each truss individually, and working our way along the roof.

Thanks to crane operator (also a Graham) and NMT crane hire for providing safe and steady lifting.

Some of the truss tie beams inserted into pockets in the masonry.

The gable truss has two external “legs” and forms an overhang over a picture window. Graham was keen for this to feature two large curved braces.

The wind was picking up, and for a while, it looked as if the raising might be thwarted, but mercifully the windspeed hovered at the allowable limit and we were able to pack the crane off ahead of schedule at 3pm.

Graham receives a Special Award for providing the best, safest, and most secure scaffolding we have ever had the pleasure to work on at Castle Ring Oak Frame. Feeling safe is something to be cherished when you’re putting up a monster frame!

And if that wasn’t enough, he also receives a Bonus Award for popping out to the local farm shop at lunchtime and bringing back the best oven-warmed, home-made pies we have ever savoured.

In mid July last year, Matt and Lucy arranged to come and see us to informally discuss the plans for their new build house near Ludlow, and to see if we could design and quote for an oak frame. So began several months of information gathering on their part, as they tried to work out the best approach to the project. Not easy by any means, as they were working full time and new to the idea of building a home.

By November they had made up their minds – to go with an internal oak frame (designed and made by us, yippee!) encapsulated by a softwood insulated frame courtesy of Taylor Lane in Hereford.

Contracts were signed, and now we could get to work with the frame design. Martyn Davies, one of our frame designers put in the hard yards and came up with a design that incorporated all of Lucy and Matt’s ideas, including internal half-timbered wall partitions, an external lean to veranda and a jettied gable.

Inevitably planning to build a house can take longer than anticipated and it took until early February for the frame drawings to be signed off and the oak ordered with a scheduled delivery date towards the middle of March. Of course, we all know what happened then to turn our world upside down. For several days, it looked as if getting the oak over from the mill (open, but only just) in France was going to be an impossibility, but somehow we found a haulage company, a port that was open and unloaded the oak to much relief all round.

By now, Covid had ensured we were down to a skeleton team (actually just Rob in the workshop!) so fabrication took a little longer than usual. This worked out well for Matt and Lucy, who were able to get ahead with the groundworks, whilst simultaneously having their first baby. Congratulations!

A couple of workshop visits to see the frame in progress whet the appetite and kept spirits up and before we knew it, we were readying ourselves for the raising at the end of June, nearly a year since the process began.

The scaffolding was erected and the oak delivered to site ready for an anticipated 2 days on-site. Now we just needed some good weather. Well, we needn’t have worried about that. The temperature nudged 30 degrees on both days with barely a cloud in the sky. Thankfully Matt and Lucy kept the Castle Ring team of Jake, Debbie, Adam, and Rob hydrated and fed with cold drinks and fine food all day.

By the end of the first day, we had met our goal and got up to wallplate, spending the last half an hour knocking in a plentiful number of pegs. Matt and Lucy were so enamoured of their half-built oak frame, they had an evening meal in the hallway.

Day two of a raising can be tricky as everyone is feeling the effects of day one. But we kept moving forward, assembling the trusses and lowering them into place one by one.

By lunchtime all that remained were the spline-jointed purlins, wind braces and ridge timbers and by 3pm we had sent our crane driver packing, with all the heavy lifting done and dusted.

This is the point where the pressure eases and you can start to relax and enjoy the frame. I say relax, but there are still hundreds of pegs to hammer in. Matt joined us for the whole raising and will always be able to say he helped put his house together.

We saved the best for last as Matt and Lucy clambered up to the ridge to “top out” the frame with a sprig of oak. Topping out is the way we bring the raising to a fitting end and say thank you to the trees that have gone into making the frame. It’s also a good photo op!

As raisings go, it really couldn’t have gone any smoother. All that was left to do was for the team to wearily climb the scaffold one last time and toast Matt and Lucy with a cold beer. Good luck with the rest of the build. We have no doubt you’ll do a brilliant job.